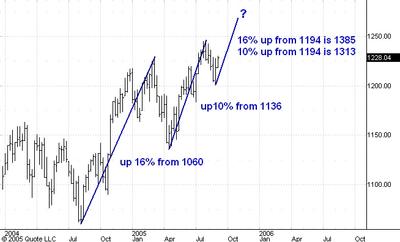 The key to forecasting markets is to find the right analogy to the current situation.

If I am reading things right (and I always believe I am !) then the rally from the " Katrina " low should be comparable to the rallies from the previous two lows. From the August 2004 low the market rallied 16% over7 months while from the April 2005 low the market rallied 10% over 3 1/2 months. So using these precedents I expect the next top of significance in the S&P to occur somewhere between 1313 and 1385. A 3 1/2 month rally would end in mid-December, quite near my current Lindsay Three Peaks and a Domed House projection. A 7 month rally would carry the market up until next March.
Posted by Carl Futia at 11:57 AM