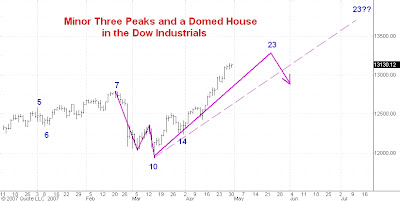 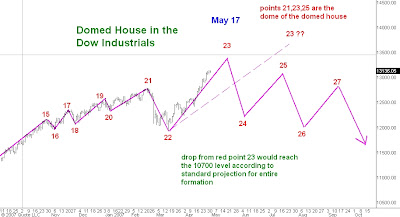 Here are two daily charts of the Dow industrials. The first one shows the market's current position in what I think is a developing George Lindsay Domed House formation. The second one shows the market's postion in what I think is a minor example of a Domed House formation. I last commented on this subject here.
For the past several months I have been guessing that the top of the domed house, point 23 in the first chart, would occur on May 17. But in the meantime the 20 day moving average of the daily count of advancing issues on the New York Stock Exchange has given a contrary indication.
It suggests that a top is not likely until mid-June at the earliest and possibly not until mid-August.
In my last post I suggested that the Spiders would probably reach 156.70 and the S&P cash index 1567 before the upmove from the March 14 low is complete. I think the market will need more that three weeks to reach this target.
All in all I now believe that the current advance will carry past the projected top date of May 17. My best guess now is that point 23 in both formations will develop in mid-July near the Dow 13700 level.
The standard price projection for the drop after the point 23 top calls for a low near Dow 10700 late this year or early next.

Welcome back,
I appreciate your taking the time to post your observations.
I check them on a regular basis and find to be informative and helpful.
Thanks

Carl, I thought I would send you my thoughts on the Dow and the Domed House, albeit with the caveat that it is very stretched and does not quite fit the template. I will start with point three as I have not made my mind up as to the location of one and two.
My dates and index prices are approximate and generally based on closes, but as I am using a 10 year graph the dates and prices may be out by 3 or 4 days and the price by the odd hundred points! Its just to give a sketch of the layout as I tend to see it at present.

Many thanks for your blog and also for having given the address of the publishers for the George Lindsay essay, which I found very interesting.