End of a Bull Market 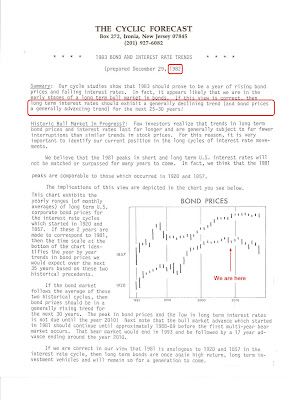 Here is a scan of part of the long term bond market forecast I published in late 1982. The bar chart near the bottom of the page shows the yearly ranges of corporate bond prices over the rising half of two very long term bond market cycles. The first of these cycles began from the 1857 panic low in bond prices and the second from the bond price low in 1920 following the post-World War I inflation. These cycles were then plotted against a time axis which began in 1981, the low point in bond prices which was reached after the great inflation in the U.S. during the 1970's and early 1980's.
Based on these two historical precedents I predicted in 1982 that the bond market would rally and long term interest rates would drop for the next 25-30 years. Now in 2008 we are 27 years into this bull market. As I write this the yield on the 30 year treasury bond is 3.35%, the lowest it has been since 1981 when it had reached a high of 15.31%. The yield on the 1o year treasury note is now 2.85%, also the lowest reading since 1981 when it had reached a high of 15.96%.
I think the drop in yields and the bull market in bond prices which began in 1981 is just about over. We may see the 30 year bond drop a little more, say to 3.00% and the 10 year note to 2.50%. But looking beyond the next six months I think we shall see the start of along term bear market in bonds. I suspect that it will accompany a persistent attempt by governments around the world to inflate themselves out of the long term pension and health care obligations they have assumed toward their older citizens.
Added later:  In case you are wondering, this is the first time in 27 years that I have said that I thought that the long term trend in bond prices was about to turn downward.
Posted by Carl Futia at 8:55 AM

How is that going to be bullish for equity markets? and why are TIPS trading so cheap?

so, where will money go?

I agree the bond market is getting close to topping, i like the previous couldnt see this as positive toward equities

Nice work Carl. It's great to see you post some of your spot on past work. To me it's your way of showing some that post on your blog how long you have been at this game and your insight and wisdom. Beautiful call.

Your history brings up one error, I believe. While the then-trading 8% notional T Bond futures did trade above 130 in 1998, the T Bond was later recalibrated to a 6% notional rate where it remains today. If the 8% notional bond were still trading it would be well above 160 now. Or put another way, the re-calibrated 6% bond traded only up to 112 1/4 in 1998 whereas it is nearly 130 today.

In my view the bond rate "should not" be making new lows 7-9 years after gold bottomed, and yet it is doing so. Greenspan referred to this three or four years ago as the "bond conundrum" and it remains so. I think it suggests not that a bond reversal is nearby but that true deflation may be upon us for sometime to come. I don't really care whether we have inflaiton or deflaion, I simply want to be invested correctly. EDV may be showing the way.

Carl
I agree with your watershed change in direction.
I suspect the dollar will drop first, followed by a multi year commodity driven inflation; which also Russell sector of the stock market.

Why do people believe that I am not aware that the bond futures are now based on a 6% yield, not an 8% yield. Believe me, I have traded bond futures since 1984 and I traded through the change in contract specs which was introduced for the year 2000 contracts.

But market players key on numbers, so the 135-08 high of 1998 will probably mark the end of the current up move, even though it is happening in the 6% contract, not the old 8% one.

I have traded bond futures for 30 years as well. Your knowledge of bond history back to 1857, at least, is unusally comprehensive---and I imagine you have Homer's "History of Interest Rates" and also know interest rates back to pre-Roman times.

I use a lot of "Gann" methods too, and I know that traders use historic "numbers" whether they make sense or not. So I would expect some reflex selling at 135. But that shouldn't obscure the fact that long rates (and TBill rates) are at 27 year (and 67 year!) lows. Historically, gold should not have made new highs this year and interest rates new lows without it "being different this time". Why it's different and what it means is an important subject, not just a facile observation by me.

Your observations re: bonds, interest rates, gold etc, are really worth further discussion and study. Perhaps Carl can elaborate?

One of your best posts ever (much more interesting than your daily "guesstimates").