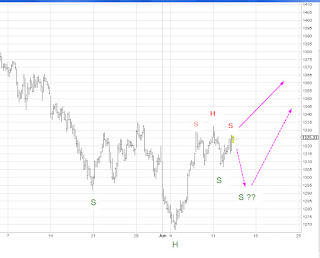 Here is an hourly bar chart of the cash S&P 500 covering the past month of trading.

As you know I think the reaction from the March-April highs ended at the June 4 low. Since the May 21 low point the market has been tracing out a couple of interesting examples of the classical head and shoulders formation.

The bigger and more significant pattern is a head a shoulders bottom. The left shoulder and the head are labeled with green letters. I am not really sure if we have seen the right shoulder yet or not, hence the two green  "S" labels which follow the "H".

Part of the uncertainty arises from the fact that the rally from the June 4 low has stalled and in the process of moving sideways the S&P has traced out a potential head and shoulders top (red lettering). The standard measuring implication of such a formation is that the market will drop as far below low preceding the rally to the right shoulder as the head was above that low. This would imply a drop into the 1280-85 range which I would then interpret as the likely left shoulder of the bigger head and shoulder's bottom formation.

With the Greek elections this weekend and the Fed meeting next week the market will have plenty of excuses to move in both directions so I think we are going to see breakouts from one or both formations over the next week or two.