AAPL - from leader to laggard 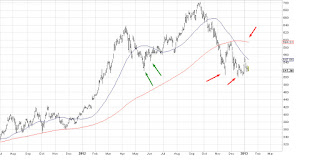 Here is a daily chart of Apple (AAPL). This stock had been the bull market leader for quite some time but now shows serious signs of weakness.

The market averages made successively high lows in early June, late November, and again in late December of 2012 (second green arrow and lower two red arrows). But AAPL's corresponding lows were successively lower. This is bearish on its face and is also a signifiicant change in behavior. Early last June the market averages made a slightly lower low than they had a couple of weeks earlier in May. But then AAPL's corresponding low was higher (pair of green arrows) thus pointing to the subsequent strong rally to AAPL's 705 September top.

Of even greater significance is the fact that the Dow and S&P are now flirting with bull market highs while AAPL is well below its corresponding high made in September 2012. This fact is emphasized by the turn down in the 200 day moving average (top red arrow) with AAPL trading well below it.

All of these factors suggest that the bull market in AAPL is over. If so a minimum downside target would be 350. Even if you happen to disagree with this prognosis it would be prudent to wait for AAPL to start showing signs of strength relative to the market averages before getting aggressive on the long side. You would want to see AAPL start making higher lows against a background of lower lows in the market averages.

The Apple fever has released finally and the market has realized there are other stocks worth investing in, so the capital is rotated from Apple to other stocks, for example RIMM and NOK.