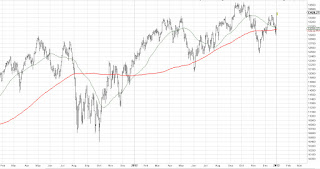 Here is a daily chart of the Dow Industrial Average going back to the start of 2011.

The weakness which followed the December 19 top made me think that this average had put in a lower top and would soon break below its November 2012 low. But fiscal cliff concerns were addressed just before the end of the year and the US stock market rallied strongly to a level above that December 19 top.

I don't think the market is out of the woods just yet because there remain a number of bearish divergences in the breadth of the market data you can find on my chart page. However the first two days of this rally from the December 28 low were very, very strong and the up trend which started then should last at least until mid-January when I would expect some sort of correction to set in.

Those of you who are following the evolution of Lindsay's three peaks and a domed house pattern should know that I think the rally from the November 16 low will end at point 27 of the domed house and probably will be a new bull market high. If this is a correct interpretation then the subsequent drop will probably carry the Dow below its June 2012 low.

A drop below the June 2012 low would then set up an interesting situation. To my eye there would then be three obvious peaks : May 2012, September 2012, and the top of the current rally which has not yet been seen. If no more than 10 months separate the first from the third peak a drop below the June low would identify this sequence of tops as a valid three peaks which should then be followed by a domed house rally.

So if the current rally ends before March 1, 2013 and the subsequent break drops the Dow below the June 2012 low I would expect that break to be followed by a seven or eight month domed house rally to new bull market highs - above the highest of the three peaks. This would mean that a bull market top would then be likely towards the end of 2013 or the beginning of 2014. Such a top would line up quite well with Lindsay's 15 year period from important lows to important highs - in this case the 15 year period would start from the August-October 1998 low. It would also make the rally from the October 2011 lows equal in time to long basic advance.
Posted by Carl Futia at 1:27 PM

I can add that my Perfect Short-Term Representative Sample, after being long for a whole week (which, in true contrarian style, led to the market going down for a week), got out of his long position going into December 31, presumably to play it safe. Now he's frozen out of the market because of the size of the rally, afraid of a post-rally correction. And so we continue to go up, until he finally can't stand it and joins the party, I'll say approximately Friday, January 18, and then we'll correct for about a week until he gets out again, to be followed by a great rally into March.

Happy new year Carl!
Very interesting analysis. I noticed that if you count 12 years 10 months from the September 2000 retest, you arrive at July 2013 for a significant low point. Perhaps the drop below the June 2012 lows will end this July.
Given the current Three Peaks Domed House that began in 2011, the market is likely to drop well below the June 2012 lows. That would be a 20-30% decline, and it is hard for me to picture the market then making new highs by early 2014. I think that 2015 is a more likely year for a huge top.

I feel stupid having to retract what I said so quickly, but I'm going to retract what I said above. I just got my volume numbers, and, darn it, my Perfect Representative Sample has jumped in again on the up side today. I'm surprised it wasn't a larger down day than it was. As long as he's in on the up side, we're going down. All my numbers are very positive, which is very bad.