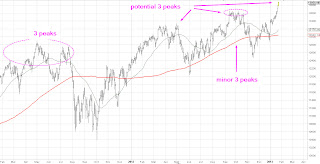 Here are three charts which I think justify the expectation that the Dow and S&P 500 have further to go on the upside before a break similar to the September-November 2012 drop develops.

The middle chart is the one which I think is sending the most bullish message, one which may well sustain the this nearly four-year-old bull market for several more months. You can see that the 20 day moving average of the daily count of 12 month new highs among New York Stock Exchange stocks is at its highest level in more that 4 years and the highest level since the bull market started in 2009. As a rule bull markets end only after this indicator has started making lower tops, a phenomenon which would take several more months before becoming possible. So this suggests that my idea that the bull market will last until the fall of 2013 is not at all far fetched.

The top chart shows the NYSE advance-decline line, the running total of daily advances minus daily declines. The last two rallies sent this indicator up 25, 000 net advances. A similar move from the November 2012 low would put the indicator at 120,000, still 5,000 net advances from where we are now. This suggests that the up trend from the November 2012 low has further to go. This reinforces my observation that such bull market up legs tend to last at least 3 months and usually more.

The bottom chart is a daily bar chart of the Dow industrials. This average has finally made a new bull market high. I want to make some comments on George Lindsay's three peaks and a domed house formation as it manifests itself in this chart.

As you know I think that a major example of this formation started with the three peaks which developed in 2011 (first purple oval). Since the October 2011 low I think we have seen a fairly well defined domed house with point 23, the typical top of the domed house, occurring in September 2012. The current rally has made a new bull market high but I still think its top, which still lies ahead of us, will be point 27. The implication here is that once the November 2012- ? rally ends the Dow will drop below its June 2012 low point.

One of you pointed out to me that one could have foreseen that point 27 would be a new high by observing that a minor 3 peaks formation developed during September-October 2012 with point 10 being the November low. Dome houses which follow three peaks always put the Dow above the highest of the 3 peaks and the domed house which has developed from the November 2012 low has been no exception. Point 23 of this minor domed house will probably coincide with point 27 of the bigger domed house. How will we recognize it? Look for some sort of head and shoulders top, possibly a distorted one. So far nothing like this is visible on the chart of the Dow.

Assuming this rally ends no later than March 1 there is another potential three peaks visible on this chart. The first two peaks are the May and September 2012 highs. The third peak generally follows the first by no more than 10 months. So if the Dow continues its advance well past March 1 I will begin to doubt this latest three peaks possibility. Assuming the rally does end by March 1 one would expect a drop at least below the November 2012 low and possibly below the June low to satisfy the the bearish implications of the 2011 three peaks. But once this drop is over the prognosis would be for a domed house rally to new highs above the upcoming third peak. Such a domed house would probably not see its point 23, the bull market top, until the end of this year or early next.

Hi Carl
Good work . i do see why the march time period would be ideal for a top
and many indicators do look a bit stretched short term . yet i favor the 3 peaks domed house having begun
in July 2010 and 2012 being points 15 though 20 .not quite and 11 month sideways movement. this places the dow now heading higher into point 21
and point 21 tends to feel like a 3rd wave which runs stronger and last longer then its previous first wave . hence point the move from point 18 to 19 should be measured in both time and price
and this move should correlate with a Fibonacci extension based
on that movement . the key extensions i have observed which on the surface do not appear to be Fibonacci numbers are 1.618 then the 2.854-3.382 range, followed by the 3.618 . this implies the dow
to new all time highs at 14330 just to meet the minimum.
the 2.382-2.854 extension range
targets the 15014-15436 range
and that would be only for point 21 . lastly the 3.618 implies a move to 16119 which seems extremely overly optimistic yet taking the move from the 2002 lows to the 2007 highs on the down and multiplying by 1.382 targets 16144
hence the larger longer term match looks to be the 16119-16144 area .
extensions . that's just about 149 percent up from the march 2009 lows
yet looking at the NASDAQ 100 it went up to around 158 percent .
just things to think of .
also Lindsay work with the try day method has merit yet that is for another day .
good luck and thanks for the post
Joe

Excellent work Carl, keep it up