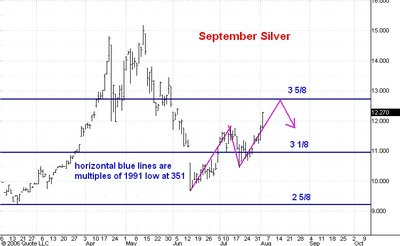 Here is a daily bar chart of September silver futures. I last commented on this market here.

I had believed that the early July top at 1182 would end the rally from the 945 low in the July contract which was made in mid-June. Instead that top only marked the end of the first phase of a bigger three phase rally. This morning the market blew past 1182. I now think it is headed for resistance near 1272 which is the 3 and 5/8 multiple of the 351 low made in 1991.