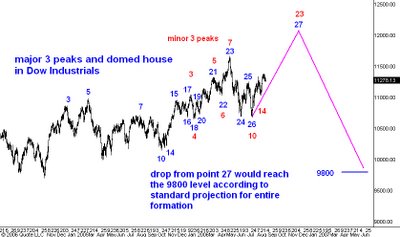 I have been following two developing examples of George Lindsay's Three Peaks and a Domed House formation in the Dow Industrials. My last post on this subject can be found here.

At the moment I think the minor (red) formation has established its point 14 low on August 11. The market is now moving up from point 14 and the next phase of the minor formation should be what Lindsay called "the roof of the first story". This constitutes points 15-20 of the formation and often assumes the appearance of an upward sloping trading range. I do not think we have yet seen point 15.

The entire rally from the July low in the Dow should bring the market to point 23 of the minor formation and to point 27 of the major formation (blue numerals). I think this top is likely to develop about 7 months and 10 days from red point 6. This would place it in late November of this year. I think that the Dow will probably rally to or a bit above the 12000 level by that time.

If this is indeed a major formation then after the November high the market should drop subtantially to the price level at which the major formation began. This is my estimation is the 9800 level in the Dow.
Posted by Carl Futia at 12:31 PM

Your analysis is excellent.
My question is: Why do you want the 27 point to go so high.
Shouldn't the DOW drop from where we are now.