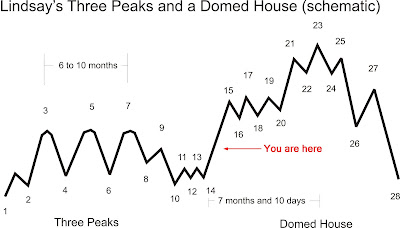 I last discussed George Lindsay's Three Peaks and a Domed House formation in this previous post. Since then a new point 14 has developed. You can see how I have relabeled the formation with its new point 14 - the August 25 low - in the daily chart of the Dow above.

The schematic below the Dow chart locates the market within the entire formation. A breakout above point 7 is due soon. The top of the domed house, usually the end of the bull market, is due 7 months and 10 days after point 14. This project to roughly April 6, 2011 by my calculations. A top then would also be a little more than 2 years after the start of the bull market in March 2009. This is the time span of one of Linday's basic advances and this reinforces the expectation of a bull market top in April 2011.

The entire corrective move since April 2010 looks like a classic Lindsay middle section which we later can use to apply the Lindsay counts from the middle section. But these counts are really only useful for predicting the date of the next bear market low and can't be produced until we see where and when the bull market high is established.
Posted by Carl Futia at 10:46 AM

A+ Carl. Very interesting! these kinds of macro perspectives to me are invaluable

hi carl
i still have some issues with early november from the other middle section counts i have noted here prior ,to add to this is the alternate 3 peaks domed house pattern which places us at point 7
seasonally though stocks tend to run higher from nov to jan each yr and i also do see the 3 peaks domed house pattern even though i do have a few concerns about it .
i would ask even though the middle section you mention is "classic "
could you label it ??? would you call it ascending ? decending ? and where would you place point e ?
thanks
joe

Hello carl, on your blog you say end of April 1380 the price is, but the three peaks and Domed House is the highest point on April 10, what is your preference / Sincerely Yours
Bakstenen