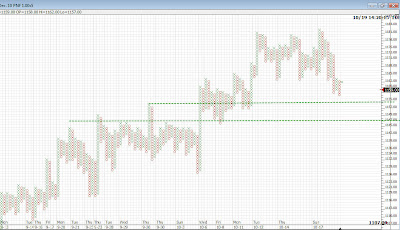 Here is a one point box, five box reversal chart showing e-mini trading for the past couple of weeks.

The ES broke below the 1162.50 low of the trading range formed during the past four days on very high volume. I think the market will soon establish the low of what I envision will be a trading range extending from 1145 to 1190. The green dash lines on this chart represent my best estimates of support levels based on the principle that support during a correction is often found at the levels of temporary tops on the way up.

The trading range that is forming will build a base that will support a breakout above the April top at 1216. I expect to see the ES above 1300 by early April, 2011.
Posted by Carl Futia at 3:36 PM