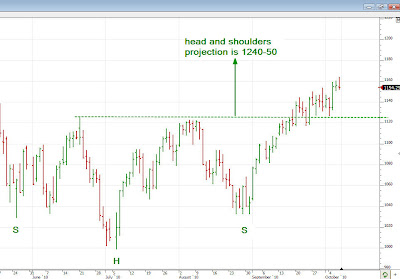 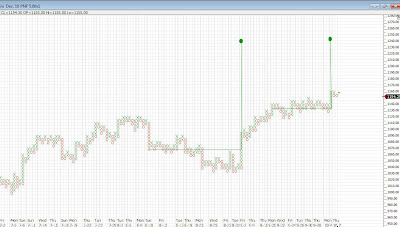 Here is a five point box, one box reversal point and figure chart showing 24 hour e-mini trading since the July 5 low at 1003. Above it you will find a daily chart of the e-minis.

The market has recently broken above the late June and early August tops, thus completing the breakout from a head and shoulders bottom formation that I first mentioned in this post.

The standard head and shoulder projection is that the rally from the right shoulder should carry as far above the neckline at 1125 as the distance from the head to the neckline. In the current situation this projects a move to 1240-50.

The point and figure chart is telling the same story. I have drawn two counts I am currently tracking (horizontal green lines). Both project that this rally will continue to 1240 or so.

You gotta love the symmertry of the market.

ok it will get there, the qusetion is when? timing is everything

did the text book tell how to figure out the timing?

timing is still everything, this kind of projection will definitely mislead and influence trader's reading of the market.

Yes, you can make some general projections of a time line by cloning the the line and get a "general" idea.

Projection "won't mislead" if trend stays in its channel.

How about spending some time and learn to read charts!