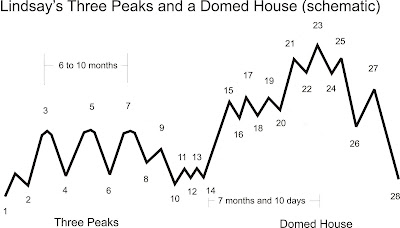 Here is a daily bar chart showing the past 6 months of cash S&P 500 action.

George Lindsay often repeated his observation that triangles lasting more than three months almost always were part of a domed house formation. In my view we have seen a triangle evolve over the past five months with constituent swings outlined in purple on the chart above. I think the market is completing or has completed the last swing in the triangle. This point is point 20 of the domed house in the schematic you see at the top of this post.

In green and again in blue numbering I have delineated examples of what Lindsay liked to describe as minor versions of the 3 peaks and domed house formations. The significance of these two minor formations at this time is that they both have completed point 10 and so imply a rally ahead to new bull market highs. This is supporting evidence that the triangle is indeed the roof of the first story of a major domed house formation and that it will be resolved by and upside breakout.

The timing of point 23 is more problematic. In the major 3 peaks and a domed house formation point 14 occurred on August 25, 2010. Projecting forward 7 months and 10 days gives a predicted top for April 6, 2011. This is the top labeled by a blue 3 in the S&P chart above. This timing forecast is one reason that many people believe that the May 2 high was in fact point 23 of the major formation.

But I disagree with their analysis for four reasons. First, if May 2 was point 23 then the five reversals, points 15-20, were not present in the major formation. This happens on occasion and is not by itself reason for rejecting May 2 as point 23. But there are three other reasons for thinking point 23 still lies ahead of us.

First, Lindsay's 15 year, 3 month period from lows to highs started from the August 1996 low predicts a top late this year. Secondly, his count from the middle section from June 2006 to the March 2009 low is 33 months. Projecting forward this amount from the March 2009 low gives December 2011 as a likely bull market top. And third, Lindsay was not wedded to the 7 month, 10 day count from point 14 as a necessary condition for the completion of the domed house. Indeed, very few of his examples fit the schematic above exactly.

This suggests that point 23 will probably develop in the fourth quarter of this year.

The minimum expectation would be for a rally from point 20 which equals the size of the triangle - in this case the size of the rally from point 16 to point 17, 130 points or so. If point 20 is in place at 1312 this would imply that point 23 will develop near 1440 in the S&P. This latter level is the level of the May 2008 top and thus takes on added significance as a resistance point.

Once point 23 is in place these several 3 peaks, domed house formations have further implications. The subsequent drop from point 23 should at the very least carry the market back to or below point 10. In the major formation, point 10 is at the 1008 level in the S&P - the level of the July 2010 low. In the two minor formations point 10 is the June 16 low in the S&P at 1258. So from point 23 I would expect to see a first wave down to 1250 or so and the entire bear market carry the S&P down to 1000.
Posted by Carl Futia at 10:55 AM

Carl, I don't see the market dropping all the way from 1440 to 1000. A major economic disaster needs to occur for that to happen. Something like a sovereign debt defautl causing another recession. But with unemployment at 9.2% I can't see that happen, I believe we are just coming off a recession and a healthy bull market of at least 10 years going forward has just got started. Maybe I'm too optimistic but that's my gut feel. I see the economy improving over the next 10 years and unemployment going down to 4%, with healthy stock market growth every single year.

Can you please actually draw the triangle (over 5 months) that corresponds to the Lindsay observation? It would help me understand. Thank you in advance.

i beg to differ with Carl's last dissertation on Lindsay's model. Not because I claim to have a better grasp of it, on the contrary, i have none at all. The reason lies in the gold price and puts skew. These two indicators are just not implying a crash so far. This confirms me that the market has not yet fully discounted or so far underestimated the potential damage of the current political turmoils around the world, not just the U.S. and Europe. The world is heating because of the pressure of the self imposed market forces. This reminds me a tyre in which to much air is pumped in until it explodes and self deflates until it reaches its balance again, which will not be too far away from us. Cheers. MC

Carl
Many of your comments are noted in this responce , i add this , the xle has a very well formed pattern
much in agreement with your overall
picture , with oil and commodities tending to lead the market of late i would keep the XLE in mind weather this is indeed point 21 begining or just part of 18 19 and 20 still left to complete .
the main swings i think year on year has now changed from march to mid august if not early september . my bias is a failure
and a breakdown or a very strong short lived points 21 through 23
with 24 and 25 completing the year
end a mid to late 2012 low of a much much larger point 19 to 20
swing .and then sometime from june to the nov 2012 elections a very strong either 19 or point 21 into around 2017.
hence a topping process of a much larger bullish picture
joe