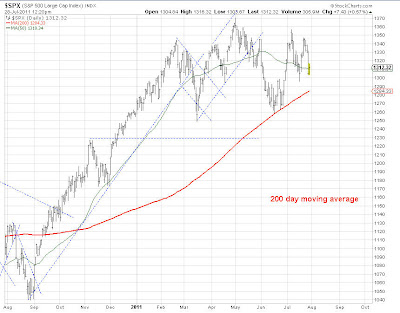 I had thought that the July 18 low would hold but subsequent market action now has made a break below that level likely. If the drop from last Friday's high at 1347.75 equals the length of the initial drop from 1354.50 the market will make its low near 1285 (solid blue rectangles). The 1285 level is also on the lower trend channel I have drawn.

The drop below 1291 will look like a downside breakout. But as you can see from the middle chart (the 10 day moving average of advancing issues) the market is already very oversold. So I think that the ES will spend at most a day or so below 1291 before starting a strong rally.

The S&P 500 is still trading above its rising 200 day moving average (top chart). This mean that the presumption must be that a bull market is still in progress. I expect the next leg up to carry the market well above the 1400 level.
Posted by Carl Futia at 12:12 PM

Thanks for your input, Carl. The channel you posted is a descending channel and it appears from your arrow drawing that any upswing will peak at around 1340, no?