three peaks and a domed house 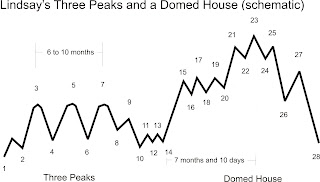 The chart immediately above this post is a daily bar chart of the Dow going back to the start of 2011. I have labeled it to match up with the schematic at the top of this post. This schematic shows an ideal version of George Lindsay's three peaks and a domed house formation. I have been following this particular formation for more than a year now.

The drop in the Dow since the election has violated the green trend line and also brought the average well below its 200 day moving average (wavy red line). I think this is pretty convincing evidence that point 23 was the early October high and thus that the peak of the domed house has been seen.

The next point of significance is the low at point 26. I think this will occur a little above the June 2012 low but it may come in a little big lower than the June low too. In any case the rally from point 26 should be bigger than any rally we have seen since August in the Dow. My guess is that it will  bring the average back up to an maybe a little higher than its 50 day moving average which I have extrapolated with the wavy blue line.

A top, point 27, at that level would give the entire pattern since April 2012 the appearance of a big, head and shoulders top. This top should in turn be resolved by a downside breakout subsequent to point 27. The standard technical measurement for a head and shoulders top would then project a minimum drop in the Dow to around 10800, the general vicinity of the October 2011 low. That low is also Lindsay's standard target for the drop which starts from point 23.

Did Lindsay ever try to explain the theory behind the 3 peaks pattern, what forces are at work to create this pattern that is repeatable in the stock market? Has anyone else tried to come up with a theory as to why stock market prices would unfold in this particular pattern?

Three Peaks and a Domed House kind of looks like Elliott Wave. Points 3-10 may correspond to Wave IV, then the domed house rally (with five subwaves) corresponds to Wave V. The fall to point 28 resembles a standard Wave II retracement back to the Wave IV low of one lower degree.

Everything seemed to be lining up for a low this week, except for one thing. After getting back up to the all-time positive reading we had last month, that positive/negative number dropped quickly, but then went back up and stayed there, never getting below 2.00, which is where I think it has to go for this low. It got down to 1.86 at the June 1 low.