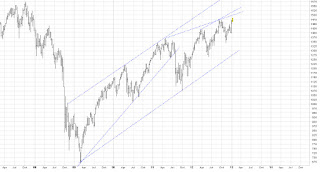 The S&P just made new highs for the bull market which started from the March 2009 lows. The Dow industrial average is still below its September 2012 top as is the Nasdaq composite index. But in a bull market such bearish divergences often melt away as the averages move higher. In this case the market is only about 8 weeks from its November 16 low at 1340. As you can see from the chart advances from obvious low points in a bull market typically last 3 months or longer. So on that basis I think we can expect this rally to continue at least into mid-February if not longer.

That said one has to acknowledge that this bull market has lasted 46 months so far, an unusually long advance by historical standards. The 2002-2007 advance did last 60 months and was one of the longest on record. Consequently any obvious turn down in the weekly chart from here would have to be taken as possibly the beginning of a new bear market.

But so far I don't  see any signs in the market's price action that such a down turn is imminent. Yes, sentiment is fairly bullish compared with previous junctures in the current bull market. But the advance-decline ratio keeps making new highs and is advancing vigorously as it does. The 20 day moving average of daily new highs on the New York stock exchange has reached the highest levels of the current bull market. You can find both of these indicators on my chart page which updates in real time.

So I think this market is stronger than it looks on the surface. There is good reason for this. The longer term bullish effects of the Fed policy of quantitative easing are in my opinion not well understood. The markets expect the Bank of Japan to follow the Fed in a policy of quantitative easing as you can see from the big recent drop in the yen and the fast advance in the Japanese stock market. These two countries are the engines of the world economy and accelerating recoveries in Japan and the US bode well for world stock prices. European stock markets have been very strong reflecting expectations of recovery from the Euorpean recession and survival of the European banking system and of the Euro.

I still think it is likely that the current rally will end in point 27 of Lindsay's domed house and that the subsequent break may well take the market below its November low.  But this would set up a bullish configuration of three peaks which would then probably be followed by yet another domed house rally to new bull market highs. This scenario suggests that 2013 will be a volatile year and that the low levels of volatility we have seen during the past two weeks are not indicative of what lies ahead.

The Bradley indicator still seems to be working these days. The Bradley correctly called for a rally from the beginning of the year (plus or minus two days) to this coming Monday, which is a holiday. So probably to the end of this week. Then it says we go down through January 30, plus or minus two days, and then a glorious up move all the way to March 7. Next week's down week will provide plenty of doubt gas for the market.

You are NOT reading the Bradley Cycle correctly. It merely indicates turning points, +/- 4 days.

Kelly, you are certainly correct, assuming you mean "polarity." I'm just saying that's what we're set up for if we do indeed turn on the dates. I only brought it up because it lines up perfectly with what Carl is saying, so let's see if it happens. It makes perfect psychological contrarian sense right now.

Plus or minus four days? I've read that before. What I've seen is, when the Bradley is working well, which I think it is right now, it's plus or minus two days. I'll add that I think that's business days, from what I've seen. Just my own personal observation.