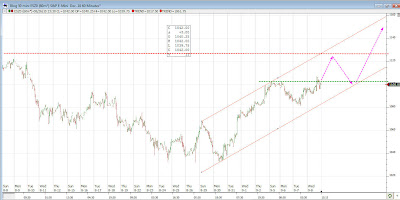 Here is an hourly bar chart showing 24 hour e-mini trading in the December contract. I have drawn an estimated trend channel on the chart. The 1100 level was resistance arising from the August 18 high at 1098.75 in the September contract. I think the market is in the process of moving above 1100 resistance. When it succeeds 1100 will become support.

The next upside target is the 1127 level which marks the June and August rally tops. I doubt we will see more than a 20 point break from there. If we do a subsequent move to the upper channel line would carry the market at least to 1140 and more probably close to the next resistance at 1175, the May rally high.

I think the ES in in the very early stages of a move that will carry it to new highs for the bull market that began from the 2009 low at 666.
Posted by Carl Futia at 3:55 PM

It certainly can go higher promptly...but I see negative divergence in RSI, MACD, and Stochastic in the 60 minute chart...

I placed my bet that it will go lower and close the 1090 gap before it take off.


I am just lowing Your relentless bullish posture, even if not agree with it 100%.
It is much better to be always Bullish than to Be always bearish and lose everything very quickly.

I agree with You, that the Up Swing is Not over Yet.
However, the Upper Limit is very much in Question.

Now the market is climbing the Wall of worry.
Asia is not a leader as it was last Year, Europe is absolutelly not a leader, and only more trouble could be expected from Europe.

I would estimete the Upper limit somewhere around the 1130 - 1155 range before a potentially strong selloff takes place, but knowing the recent market behavior to mislead everybody, both the swing Bears and the Swing Bulls, I would
not be surprized to go as high as 1119 - 1120, though that has much lower probability.

On the timing front, we have roughly another month (Maximum) before the 3q profit reports, when the market Must accpet the reality, which is not encouraging going forward.

Expect a little bit of weakness early Friday, but a more Bullish posture during early next week.

We actually might reach at least a local swing high before the end of the next week.

The market is extremely sensitive at this point. If a break occurs, it might pull down the indices quickly, in a matter of 3 - 4 days by 5 - 10%

I was busy with rollover and a number of things the last few days, just getting to read the recent comments.

Several things are apparent to me:

Carl has a great sense of humor and enormous, but not unlimited patience.

$25 is ridiculously low for a test drive

We can easily become distracted, which is counterproductive to success in any business.

Finally, Carl, win or lose, continues to display poise under pressure and adversity.

Many thanks for your contribution to our education.