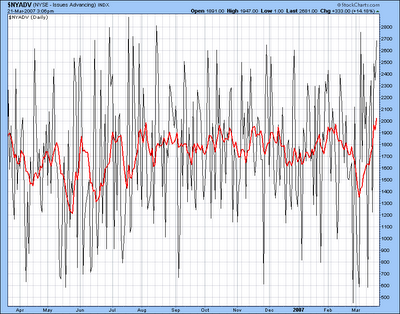 Here is a line chart of the daily count of the number of issues traded on the New York Stock Exchange that advance in price. The chart covers the past 12 months of trading and the red line is the 10 day moving average of the daily number. I last commented on this indicator here.

The most significant thing I see in this chart is that the 10 day moving average today has moved to a level higher than any it has seen in the past 12 months. In particular it is now higher than at any time during the 8 month advance from the June 2006 low point. I think this means that
the market will continue its current advance for at least another month and quite possibly for two.

Of purely historical interest is the fact that at the March 14 low there was a bullish divergence visible between both the daily advancing issues count and its 10 day moving average and the market averages themselves. The advancing issues numbers made higher lows while the market averages made lower lows. I noticed this at the time but didn't think it was significant in the broader context. In any case this divergence can be seen (post hoc) as evidence that the low of a week ago was an important one.

I think the March 14 low will hold and that all the averages will soon be trading at new highs for the bull market which began in 2002.
Posted by Carl Futia at 4:08 PM

Like I said before everyone had this market going down. All I read was 3rd wave down soon. When everyone is on the same page it is rarely right. In a few weeks while we advance a little higher everyone will be saying, see that was just a correction in late Feb. we will see 1550 on the SPX soon. That will be the time to sell. I highly doubt we will see 1550 SPX.

OEX stayed below the 50

There's a bearish Diamond and Andrews pitchfork from todays chart.

Market needs to drop steadily from here though to confirm....

Carl, so the congestion we saw could also be considered a base forming to launch a rally 10 boxes up?

Another thing going for the bears is todays extreme $Tick reading of +1600 which same reading that occurred on 3-12-2007 top before sharp drop into 3-14.

Tim Ord has done some excellent work on how the extreme $Tick signals tops and bottoms.

I am wondering why you seem to believe so strongly in a dollar rise and gold collapse.

Gold seems to be in a very bullish year long consolidation before starting another upleg and the dollar is only being held at its present low levels by foreign buying to keep their own currency from appreciating. Is your view technical or fundamental?

Thank you for all the work you put into your blog.

Carl--I enjoy your blog. But it proves to me, once again, that the market has an amazing ability to make the experts look like fools.

only 3 weeks ago everyone was shitting their pants over that almost 500 point DOW drop. And now it's on to new highs? Not so fast, we gotta consolidate here a bit more before those new highs can be conquered. And please don't lose sight of that nice gap up at 1400 from Monday morning. Only three days ago!!!

All I see so far is the return of volatility. This market can just as well drop 200 points here.

So why do you not consider this high level of the 10 day m.a. a sell signal? Looks to me that in the past this was a good time to sell.

gold drops due to deflation, look at PPI rate of change.
According to Gann, correction can through price and time, this time through price with very little time. Hence no surprise to see shape rally like this. I am impressed about Carl's work and his flexibility

I truly feel that Fed's protection is working today

It looks like your red line is the 10-day exponential moving average. Is your interpretation the same?

This is indicative of high volatility markets. Zweig's 9:1 days mean diddly any more with some much short term focused money. It doesn't mean a turn around. It might simply be that we are filling gaps. It might be a hikkake or move of deception. It might be one of many things. I expect alot of people to be whipsawed.

I am believe that we to see a Crash to 23 april.Bear have to control,yesterday was exception by fed factors.17-23 april or finally april is the date to see.

You wrote "I noticed this at the time but didn't think it was significant in the broader context."