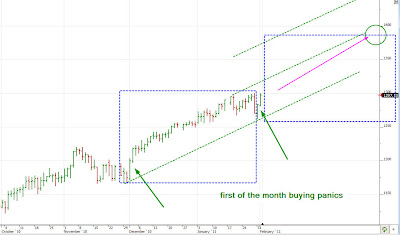 The move up from the Sunday night shakeout low at 1262.25 has been relentless. It reminds me of the rally which began last December 1 in similar circumstances (green arrows on the daily ES futures chart above). I think in each case the timing of the buying on the first trading day of the month following a shakeout is significant. I think these buyers are longer time frame investors and traders and that their buying is strengthening the market's technical position, not weakening it.

The rally which started on December 1 carried the market up 125 points from its shakeout low. A similar rally here would bring the ES up to 1387 (blue dash rectangles). I think the market has a good shot at that level (green oval) by April. This would coincide with Lindsay's domed house forecast of a top around April 8 which could potentially end this bull market.

I have also drawn a doubled trend channel on the chart. The middle line would be the normal channel target and suggests that the market might easily reach 1387 by early April. But if the ES is even stronger, perhaps in response to good economic news, the market could take the bit between its teeth and move up to the top channel line I have drawn.
Posted by Carl Futia at 11:31 AM

My only comment is that it might go down to 1085 one more time before resuming the upside you are suggesting. But it certainly looks like the bull is back.