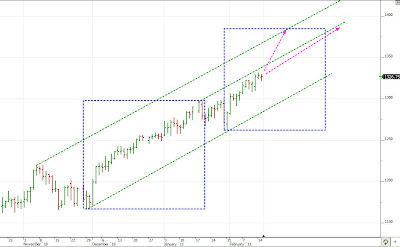 Here is a daily bar chart of the e-mini futures. The market is up more than 30% in less than six months but shows no signs of even an intermediate term top yet. I am expecting some sort of top in April, probably near the 1380 level.

In the chart above I have drawn two trend channels(green dash arrows) . The market has been hugging the upper line of the narrower channel for weeks. An advance at this same pace for the next two months would carry the ES to 1380 or so (lower purple dash arrow). On the other hand, the top channel line of the wider channel would allow for 1380 much sooner than April (upper purple arrow) and would give a target above the 1400 level for the April time period. Since I think we have to see much more volatility and a faster paced advance before an important top can develop, this second possibility is one that I think is equally as likely as the first.

The blue dash rectangles highlight the fact that an advance from the 1262 low of late January 2011 that matches the size of the rally from the November 2010 low would carry to 1387. So the latter level is my minimum expectation for this bull market.
Posted by Carl Futia at 11:34 AM

Carl,
It's nice we are going higher, but, shouldn't we be getting a correction before the 1380 appears?

Carl, how can somebody who does not have the time to do real time subscribe to your services?

Carl, can you confirm you got my check?? Janet