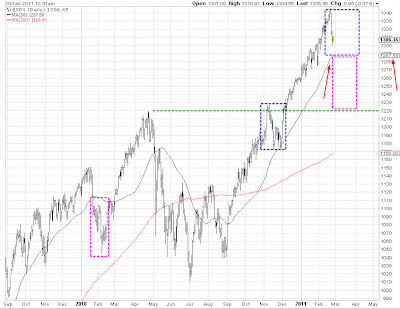 We have just seen a substantial, 3 day break and the question is whether or not it is just the first stage of something bigger. It is hard to tell at this juncture because the at the moment the S&P has not even matched the size of the drop of last November (blue dash rectangles). Thus the rhythm of the rally from last July's low at 1008 has yet to be broken. The S&P can drop as far as its 50 day moving average (red arrows) near 1287 without breaking this rhythm.

If a bigger drop is indeed underway then I think it will be similar to the January-February 2010 break. That correction carried the S&P nearly 70 points below its 50 day moving average. A similar drop now would end near support at the April 2010 top (purple dash rectangles and green dash line).

I can't guess which of these alternatives is the more likely. But I am confident that new highs for the bull market will be seen once this correction is complete.
Posted by Carl Futia at 10:45 AM

Thanks Carl, for the update.

It does look and feel like the Feb-Mar 2007 China / EM driven correction - that one took 2 weeks and about 100 pts and then we were off again.

Three things I want to mention. First is light volume on Tuesday and Wednesday this week (the two days the market dropped) have been the lightest volume of the year. Second is today the market can't move up despite advances issues leading declining issues overwhelminghly. This would have been unthinkable last week, when the market was doing the opposite, going up despite a weak advance decline, today it can not go up on a strong advance decline ration. The third thing that caught my attention is how brutal this correction started, it didn't take a week or two to make a top like it did April last year. It just shot down violently.

The low volume tells me most people haven't sold yet, a lot of the guys that bought at the top. Most people exited the market (and new entrants) came in when the market was on it sway up. On its way down the lightest volume this year occurred. As soon as the weak bulls start selling the market will tank.

I do think the most optimistic scenario right now is a correction to the April 2010 highs (a scenario you mention as possible). Now for me the next scenario is a correction like the one we had in April 2010 taking the S&P down to 1,100. And a third scenario is this was the start of a bear market, let's say a 25% drop over 9 months. The fact that a top was instantly made, and good bye 1344, is the way bear markets start. Maybe the bear market you've been calling to start in April, just started a couple of months earlier.

I'm having difficulty reconciling the Lindsay April projection while also expecting to see new highs for this bull once the reaction is complete. If we are to see new highs, AND the Lindsay forecast is correct, then this bull will pretty much have to sprint back all the way before the April. Well this confusion has me frozen. So it's time for the sidelines for me.

i would appreciate a Lindsay projection update as well. The pattern has held reasonably well.