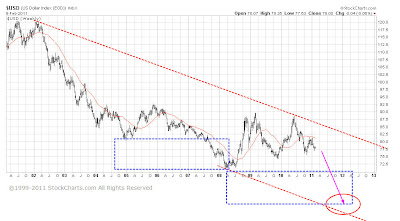 I thought it would be helpful to remind you once again of my longer term thinking about the stock market at this juncture. Surprisingly it is best illustrated by looking at the two charts above, neither of which is a stock market average.

In my view the single, most important thing to understand is that the Fed plans to continue its program of quantitative easing. And I think it won't end until the unemployment rate drops below 7% (currently 9%).

I think the Fed is doing the right thing here - correcting the mistake it made in the fall of 2008 and which it nearly repeated in the summer of 2010. What was their mistake? Failure to accommodate a big increase in the demand for liquidity which arose both times as a response to a banking crisis - in 2008 the crisis was in the US and in 2010 in Europe.

Until the unemployment rate drops substantially I don't think there is any risk of inflation exceeding 2 or 3% here in the US.

The thing to know about quantitative easing is that it raises the prices of capital goods by raising expectations about the nominal and real returns they will earn over the coming years. This change in expectations sends stock prices upwards. Asset price increases will lead to increases in employment and to a surge of business activity, both goals of the Fed.

These interest rate increases do NOT reflect significant changes in inflationary expectations ( the 5 and 10 year tips spreads have moved upward about 50 basis points since November). Instead they express the market's belief that economic activity is going to pick up and that the real return on assets is increasing. I think the 10 year note is headed at least to 4.50%. Ultimately it should trade above 5.00% yield in the process of reflecting expectations of 2-3% inflation and 3% economic growth.

So on this basis increasing bond market yields are very, very good for the stock market - exactly the opposite from what you are being told by the talking heads on TV and a lot of market bloggers I follow. When to start worrying? If and when this increase in yields stops or is reversed.

The top chart is a weekly chart of the US Dollar index. Quantitative easing in the US which is not matched by similar easing in the rest of the world sends the dollar down. From the point of view of encouraging economic growth in the US this is a very, very good thing. Cheap dollars increase demand for US assets and produced goods. In Europe the Irish and Greek economies are in depressions while the Icelandic economy, which also suffered a banking crisis, has gotten by with a relatively mild recession. Why? Ireland and Greece are Euro countries and could not devalue to restore competitiveness. Iceland is not a Euro country and its devaluation held to cushion the effects of its banking crisis.

Dollar depreciation is another sign that quantitative easing is working. I think the US dollar index is headed for the 60-65 range. Note the trend line and repetition targets.

Should the dollar start to rally strongly I think the US stock market will be in trouble because that will mean that the Fed's quantitative easing policy is no longer working.
Posted by Carl Futia at 11:29 AM

carl, I use to love economic explanations of the price action but now I hate them thanks to you. lol. thanks

Wouldn't it been better to have given back each tax payer 3 years worth of Fed income tax return with a minimum $20,000 to families to stimulate the economy. It's the people that make up for 70% of the GDP. Some people would spend it and some would save it and some would pay down on there back house payments and such. QE2 to prop up the stock market is targeting the better well off people and the ones with deep pockets. It's our debt that's going to destroy us, Carl.

Shouldn't the dollar rally WITH Treasury rates ? Higher interest rates, higher dollar AND higher equity markets as all of this points towards a stronger economy.

I think Mr. Bernanke now believes in a self sustaining economic expansion. Otherwise, he would not have started strongly emphasizing the need for fiscal consolidation as he did this and last week.

I think the markets will soon enough start to expect no QE3.

The Fed will use QE until unemployment drops below 7%. If big business understands this and likes the easy money policy of the Fed, why would they hire anyone.
As long as hiring remains flat, the Fed will continue its easy money policy.
What I hear is that as soon as you start hiring, we will stop the easy money. Therefore, big business will outsource jobs and keep unemployment above 8% in the USA.
It would be counterproductive to do otherwise.

Agree that QE will drive up the nominal value of stock market indices.

But QE has got so far that US Fed reserve credibility has got a hit.

The yield has surged susbtantially on concerns about inflation, opposite to what QE is intended for (at least partially intended for).

This may mean that we are at the later stage of QE.