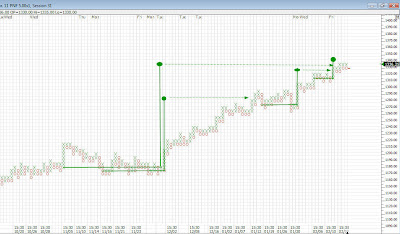 Here is a five point box, one box reversal, point and figure chart showing 24 hour e-mini trading back to late October of 2010.

One useful feature of point and figure charts is the "count". On a one box reversal chart the length of an advance or decline is often close to the width of the trading range from which the upward or downward swing began.

On the chart above I have drawn several such counts. The targets are indicated by green ovals. The November 2010 trading range gave me two targets, one at 1280 and the second at 1335. When the first target was hit the market went 15 points higher and then dropped about 35 points.

I have also drawn two other counts from smaller trading ranges on the way up. The project to 1330 and 1350.

What is the implication of the fact that the market is currently trading near these targets? My guess is that the ES rallies to 1350 or so and then drops 30-50 points before resuming its uptrend.
Posted by Carl Futia at 12:35 PM

I have always been amazed at the symmetry of the market and the almost "magical" ability of it to retrace to exact fib levels.

You are kind to give away some of your charting "secrets". Sad, thing most traders won't spend the time to do the homework that you do.

Carl has been one of the very few and RARE technicians in the Blogosphere who has not succumbed to some type of absurd "Wave Theory" that can be interpreted sixteen ways to Sunday.

Kudos to Carl for his excellent work, AND for actually having real "skin" in the game . . . as opposed to everyone else in the blogosphere.

This market doesn't seem to want to correct. I've been expecting a correction for 2 months and nothing has happened.