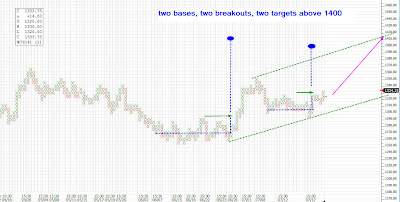 Here is a five point box, one box reversal chart showing e-mini trading going back to the May 2 top.

As you can see the market has formed a pair of bases, one in June and one during the past week. Today we have seen a high volume breakout from the second, higher base. Both bases show point and figure counts (dashed blue lines) projecting a move into the low 1400's. I have drawn a green dash trend channel which offers pretty much the same projection.

I think the low this past Monday was point 20 of the Domed House for you Lindsay fans. Adding 7 months, 10 days to the point 16 low on March 15 gives a projection of October 25 or so for point 23, the top of the domed house. As I mentioned in the post I just linked to, late October is also about the same time that Lindsay's 15 year period from low to high and his count from the middle section project bull market tops.

For you Elliott fans I offer the following observation. I think Monday's low ended a fourth wave triangle within a five wave move up from the March 2009 bear market low. Wave 1 carried the the S&P up about 550 points and ended in April 2010. Wave 3 started from the July 2010 low, carried the average up 365 points, and ended in February 2011. Given the Fibonacci progression thus far - 550 points, 340 points - I would anticipate that wave 5 would carry the S&P up about 220 points from the July 2011 low. This gives a target of 1515 for the bull market top.
Posted by Carl Futia at 11:22 AM

Great technical analysis Carl. Though I believe that the fundamentals need to match the technicals for technical analysis to work, which means both the technicals and fundamentals need to be aligned. I don't believe they are in your analyisis mainly because the US economy is coming out of a recession, in my opinion it's been a slow clime and it will continue. Actually it's just getting started. So I can't envision any sort of bull market top this year, or put it another way a bear market can not start on October 25 as you suggest. The economy is powering ahead today, albeit slowly, and it'll be powering ahead in October. There have been and will continue to be soft patches but not enough to trigger a bear market. I believe in 2009 started a decade similar to the 90's, 10 years of economic growth and no bear market. The fed and politicians will simply not let it happen, and the US can not afford another recession financially.

Agreed.. I see NDX targeting just shy of 3000 and I fully believe the crowd is underestimating the asset reallocation that may happen post-Aug 2nd debt ceiling resolution as all the pm's are underinvested in equities which are considered fundamentally cheap. Not to mention, if EURUSD gets much higher, we may see some unexpected fuel added to this risk-on fire.

"The fed and politicians will simply not let it happen, and the US can not afford another recession financially."

Do you really think they're almighty and can avoid the unavoidable ? The more they'll fight against the deleverage that has to happen, the toughest it'll be.

Bill,, if you study past bull and bear markets, you will find that the lead/lag relationship between the stock market and economic growth is anything but coincident. It is very easy for stocks to rally big without the economy being aligned as you say. There is an enormous disconnect between prices and fundamentals which is precisely why Mr. Buffet sometimes needs to wait years before everyone else recognizes the value in his investments. MK

Thanks Carl for your generosity for offering this free to the public! Yesterday trades were simply AWESOME.