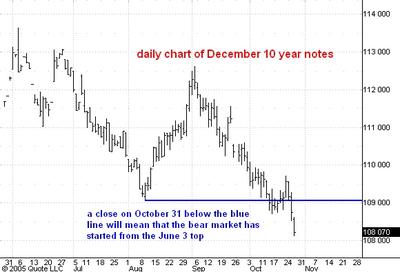 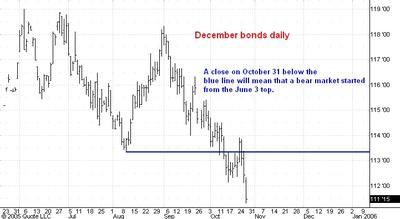 My working hypothesis all year has been that these markets made lows in May 2004 and have not yet seen their highs for the move up that started then.

But there comes a time when the market's action contradicts any hypothesis. In this situation I have been regarding a monthly close below the August '05 lows as reason to abandon my longer term bullish views which were expressed in my 2005 bond forecast.

The break during the past three days makes a close on October 31 below the August '05 lows very likely. Such a close will mean that the notes are headed down to 102 or so. The bonds may well stay above their May 2004 lows but will probably drop at least to 107 or so. These low points will probably occur during the second half of 2006.
Posted by Carl Futia at 3:03 PM