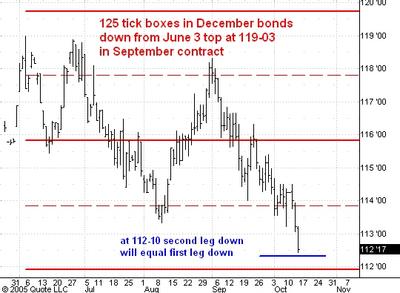 I had thought that the August 8 low ended the reaction from the June 3 top in the bond market.

As you can see from the daily chart of the December bond futures above I was completely wrong about this. The question now is whether or not a new bear market has started.

This is one reason why I think my "up to 121-123" forecast still has a good chance of bearing fruit. The other is that very few people see any chance of a sustained rally in bond prices from here given the unfriendly stance of the Fed.

In any event, I think the market is at a juncture which will soon tell me whether my bullish view can be sustained.

Any significant weakness below the 112 level will be evidence that the rally into the 121-123 zone that I have been expecting will not occur until the next bull market begins.
Posted by Carl Futia at 12:07 PM