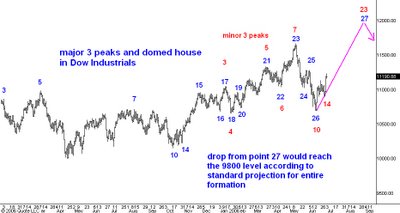 Here is a daily chart of the Dow Industrial average going back to the start of the major three peaks and domed house formation which is underway. I have been tracking George Lindsay's Three Peaks and a Domed House formations in the Dow and the S&P. You can read my real-time analyses here.

I think that the June 14 low in the Dow was point 26 of the major formation. There is so much unreasoning bearish sentiment in the US stock market that I think the rally to point 27 will carry the average to new bull market highs. My best guess is for a top near 11900 which would be a new historical high for the Dow as well.

When might the upcoming top occur? The 7 month, 10 day standard time interval from blue point 14 timed blue point 25 in my opinion. So the standard interval in the major formation is not helpful here.

The standard time interval in a minor (red) formation is harder to apply since the interval is not likely to start at red point 14. My best guess is that point 23 of the minor formation (and point 27 of the major formation) will develop about 7 months and 10 days from either red point 4 or red point 6. This predicts a bull market top for either August 30 or November 27 of 2006.

Another way to look at it is to average August 30 and November 27 which gives October 13. Since it is not that precise of course, say the week ending October 20 just as an area to look for.