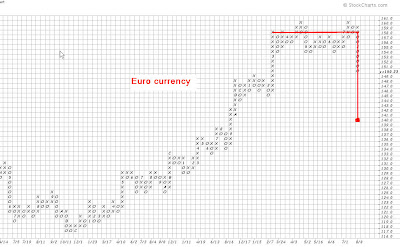 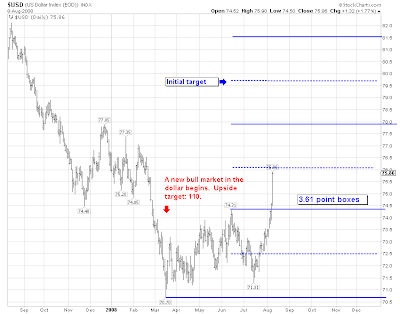 Here are two charts which tell me that a big change has occurred in the U.S. Dollar.
The first chart is a daily chart of the U.S. Dollar index. I think a new bull market started from the March low at 70.70. If I am right about this I think the index is headed for the 110 level over the  next few years. Shorter term you can see the 3.61 point boxes which I have drawn starting from the March low. I think this initial move off of the March low will make it up to the 79.70 level which is the 1/2 point of the third box up from the low.
The second chart above this post is a point and figure chart of the Euro currency. A big top formed between the 153 and 160 levels and now you can see a decisive downside breakout. A count across the congestion range yields a downside target of 140.  I think the 135 level is more likely because as you can see on this chart there is no sideways action which could act as support near the 140 level.
Posted by Carl Futia at 10:20 AM

nice work Carl. Have a look at the SP500 in EUR terms. Also very interesting. CF.

HI CARL
I have been watching 2 large 3 peaks domed house patterns
and im begining to take a strong veiw that a new bull mkt began at the july lows this yr on the week chart based on the 3 peaks domed house pattern . the monthly chart
though would have put in its point 20 low at the july 2008 lows .
so if the normal lindsay pattern was to last 18 months ( im not sure of yet i will look up )
then we are in the early stages
of an entire new 3 peaks domed house pattern which is on at point 1 on the weekly chart .
once this enitre pattern completes
it should also corespond with
point 23 on the monthly chart
this implies once this pattern is complete the dow will head down
towards 6000 from near 16000
id love to see where you stand on this going forward . i'll post
moy notes for you once i have the charts labeled and posted
joe longwill