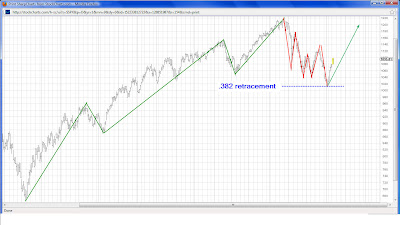 Elliott wave theory has become very popular in the wake of the 2008-09 financial crisis. Lots of Elliott wave blogs have sprung up and most of them focus on the U.S. stock market averages.

I have mixed feelings about Elliott's wave theory. On the one hand it can sometimes enable one to construct spectacularly correct market forecasts. On the other, it offers too much scope for personal prejudice and bias to influence the wave count. For this latter reason I don't find it much of much use in my day-to-day market activities.

In my view the top two Elliott wave interpreters of the last 60 years were Hamilton Bolton and Charles Collins (sadly, both now deceased). They shared one important attitude towards Elliott's theory. Each believed that one should not expect the small details of the price movement to fit the theory exactly. Instead they emphasized the importance of looking only at the big picture, especially if it just jumps out at you from the chart.

The chart above this post shows the cash S&P from the start of the current bull market on March of 2009 at the 666 level. I have traced in green the first upward leg of the bull market which divided clearly into a classic, five wave Elliott pattern. Elliott's theory asserts that a five wave movement up from a low such as was seen in March 2009 is never a completed bull market. Instead it will be followed by a three wave corrective movement, and then by at least one more, five wave move up to new highs.

Not only is the wave pattern of this correction exceptionally clear, but the correction ended almost exactly at the .382 Fibonacci retracement of the five wave up leg. This is added evidence that the correction is complete. Further support for this deduction comes from the extreme bearishness of individual investors and the strong bullish divergences shown by the advancing issues oscillators at the July 2 low point.

So I think that Elliott's wave theory offers more evidence that new highs for the move up from the March 2009 low lie ahead. The remarkable thing about this analysis is that, despite its simplicity, it is not the view of most of the Elliott wave blogs (exceptions: Caldaro and PUG). The Elliott wavers are bearish, almost to a man. This illustrates how easy it is to fit Elliott's theory to one's own market biases.
Posted by Carl Futia at 12:16 PM

I've been watching your calls this past month. Excellant work in the face of a very bearish world.

It seems some of the other bloggers I read are coming round to your view, though most remain bearish for now. Interesting take on the current a-d line and price action from one particular blogger who seems to have turned to a more bullish view. The link is
http://hometraderuk.blogspot.com/

Keep up the good work - Yogi

and my blog since the flash crash, if you choose to take a look :-)

Carl you make some excellent points about E-wave. I try to keep an open mind and neutral bias in my own E-wave work. It has allowed me (like you) to make some good market directional calls in the past year. Keep up the excellent work. Thanks for the plug and I'm always checking in our calls. -PUG

Hi Carl
you are correct with the 5 waves up
as well as your toughts about bloggers. many are focring wave counts of the decline which have no
real solid validity . rn elliott note what he termed an irregular top which leave people thinking there was a 5 wave move up yet what it really is a complex wave 4.
this would place the top of wave 3
at the january 2010 highs and the entire move from january to july would be an expanded flat wave 4 argues for new highs in wave 5. that said im convinced this is what is taking place despite the obvious look to it . i tend to think thhe 5 up is valid and the decline to date is part of a more complex pattern which will lead to lower prices .my sork is based on cycles and ill admit they are being tested yet i have noted my reasons for a top from late july into early august for a long time and as of now i dont see a reason to change my mind becuase the market is still holding up
the proof in the pudding will be seen soon enough .
thanks for your thoughts
joe

loved the blog and update!
Day was rough but ofcourse passed
positive with your grace.
Amazing guess estimates!
Stay safe and happy as you make us all happy!
GN, Sir

I agree with most of your comments, except I see this as more of a zigzag than a flat in that wave B did not move back close to the origin, and there is nothing that indicates that this is not just the first part of larger combination correction which could last well into the fall.

Overall, though your assessment that we will see higher prices after the correction is over is right on target.

Thanks chief...Looks like good analysis to me. IMHO, Mr. P of Elliot wave is the perfect contrarian indicator. When he starts coming out of the woodwork it's time to start buying.

stocks continue to drift higher and have rallied nearly 9% since
bouncing at 1010 back on Jul 1; the sp500 has been higher for the last 6 consecutive sessions; noting increased buy participation from larger long-onlys but still some hesitation to jump fully into equities; there was some profit taking earlier in the session but these people pulled back as the tape’s strength persisted throughout the afternoon; shorts not putting on fresh exposure.

Thanks for the insights as usual.

I watched a webinar over the weekend... The author (Flanagan) has been around for quite some time... and he really is authentic and rigorous in his work...

Rather lengthy but I found his study of "time" to be quite compelling... and he, like Mr Futia also saw the recent low as a major bottom.

No shortcuts in this business; due diligence advised.

I have had some mixed results with waves and completely agree they should be drawn over the long run with some Fib retracement applications.

I also noticed with a Fib drawn to the intermediate range that 1109.75 seems to be a confluence area, as well as a 50% retracement level...I am looking for resistance or a blow-through there.

This time is different..it is. The bears said it from 2009-2010 as we were in a bear market. They got their dips and quickly stamped P3 only to watch the tape go higher and higher and higher.

Now the TREND has changed and the bulls don't want to let go. This time is different. We are now starting the bull run again. Hey, the bears tried for a year and a 1/2 and failed every time.

Maybe this 5th "this time will be different" will work. I don't think so, but who knows.

My question as far as the comment about EW not being unbiased..would be to the box theory that you use. I have been following for a while..disagreeing with most of the move down and the lows being in place -but RESPECT and appreciate your work!!

But if I were to teach my 9 year old nephew your box charting theory (it is good)and asked him "what direction should the indexes go from here and where?"

He would hands down say with zero capital involved-so as unbiased as a 9 year old can be-say..well the last leg up went up 94 points-this leg went up 94 points and the next move should be down.

The last move down was 128 points down-so the es should be heading down to 950ish (I don't feel like doing the math :))

So why has your box theory charting suddenly changed if looking at it with an "unbiased" view? It worked fantastic on the way up..why not on the way down?

If the es breaks this range, yes, I will say-this pattern has changed and look for the next box turn spot-but we are just about exactly where we should be for the next leg down-if using your charting style with an unbiased view.

I appreciate your work and this is NOT a slam towards you-more of a question on the unbiased part and why not just use it how you have been using it-but reversed? G-