Advancing Issues and the Next Top 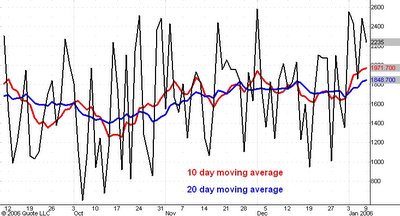 Here is a daily chart of the daily count of the number of issues on the New York Stock Exchange which advance in price (black line) as well as of the 10 day (red line) and 20 day (blue line) moving averages of this number.

So I conclude that the uptrend which began from the 1168 October 13 low will last at least until early March and quit possibly until early May. Note that I have used Lindsay's top-to-top counts to forecast highs for March 17 and April 5.
Posted by Carl Futia at 10:03 AM