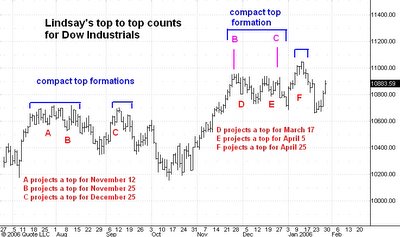 Here is a daily chart of the Dow Industrials which shows George Lindsay's top-to-top counts.

I last discussed this subject here and here and I also mentioned it in my Three Peaks and a Domed House update.

I have added another count to the chart. This one has its base point labeled F on January 10, 2006. This was the low of a one day dip prior to the January 11 top. Using Lindsay's rule and counting forward 105 days we find that April 25 is the ideal date for a top in the Dow.

Note that this method also forecasts tops for March 17 and April 5. I think the March 17 prediction will at best correspond to a very minor top because yesterday the 20 day moving average of the daily count of advancing issues on the New York Stock exchange reached a new high for the move up from the October 13 low. This means that an important top is unlikely prior to March 26. This leaves us with April 5 and April 25 as possible dates for the end of the bull market advance.

Remember that Lindsay said every bull market top he had studied was timed by a top-to-top count. Right now I am leaning towards April 5 but given the amount of bearish sentiment still in the market I am starting to give April 25 almost as much probability.
Posted by Carl Futia at 10:41 AM