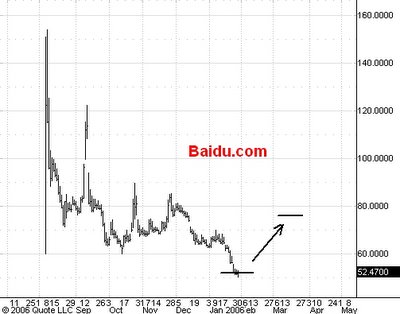 Here is a daily chart of Baidu.com.

Shortly after its IPO I was very bullish on Baidu, figuring that the big upmove in Google would ignite a frenzy in BIDU too. I was dead wrong and you can see the result. BIDU is down about $100 from the high it reached shortly after its IPO although it is still up about $25 from its IPO price of $27.

I still think this dog will have its day but probably not until the next bull market cycle of 2007-2009. In the meantime it looks like the 50-52 are is going to be strong support and a rally into the 75-80 range should be the next development.
Posted by Carl Futia at 1:13 PM