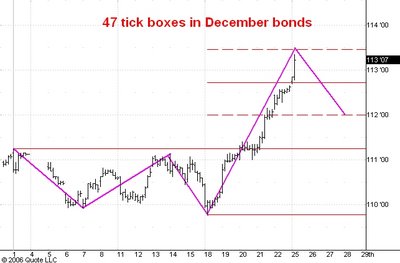 Here is an hourly bar chart of the December T-bond futures. I last commented on this market here.

I thought that the market would halt its advance temporarily near the top of the last box at 112-23. Instead today we have seen a burst of strength which so far has carried the bonds up to near the midpoint of the current box near 113-14.

A short while ago the market advanced about 12 ticks in just 5 minutes. This action comes after an extended and uncorrected rally from the 113-25 level. In such circumstances a sharp advance which brings the market near resistance (the midpoint of the current box) is likely to indicate the temporary end of the current trend. I think this is what is happening and I expect the market to drop to the midpoint of the last box near 112-00 before another significant advance starts.

It is important to remember that we are in the first stage of an extended bull market in bonds which began from the low at 105-11 in May. I think this first stage will now carry into the 114-115 range. From that range a reaction lasting several weeks will probably develop.
Posted by Carl Futia at 10:20 AM