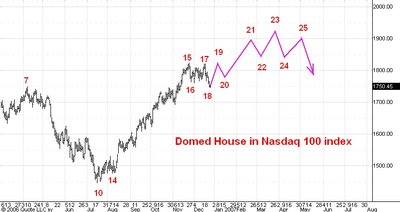 As you know I have been tracking the development of a George Lindsay Domed House formation in the Dow. My last post on this subject can be found here.

I think the Nasdaq 100 is about to establish point its point 18 low, although I could make an argument that it is in fact point 20 instead. In either case the prognosis is the same: a continuing rally, probably until the end of March. I expect point 23 in the Nasdaq 100 to develop near 1920 and the corresponding high in the QQQQ's to occur in the 47-48 range.
Posted by Carl Futia at 12:11 PM

Great!-thanks for the NDX100 info!

Hello,the nasdaq up and the dow jones down ufff.I am believe that the stockmarket can have strong down in 2007 january-october for that 4-20 cycle years.The domed house i am see very longuer time 1999-2006 in the dow jones is very dangerous.

nice thought regarding the
nasdaq 100 . i have been wrestling with the 1887 to 1924 taret range
for a while now . please update
that chart from time to time .
i find the 50 dollar level on the qqqq also interesting since this is the ipo price .

Just hit the 50th month of the 4 year cycle.

Only 3 cases since 1893 that stocks have made new highs past the 49th month in the 4-year cycle so this is the 4th.