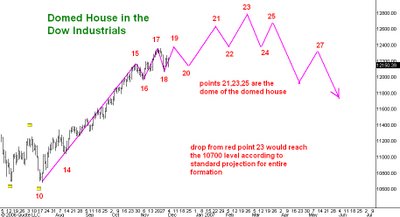 Here is a daily chart of the Dow Industrial average. On it I have marked in red numbers the turning points of a developing domed house which is part of an example of one of George Lindsay's Three Peaks and a Domed House formations. I last commented on this domed house here.

I now believe that fluctuations since late October have been tracing out what Lindsay referred to as the "five reversals" part of the domed house. These reversals often assume a vaguely triangular shape and should be associated with a definite slowing of the advance from point 14.

The implication is that the peak of the domed house is still ahead of us. Measuring 7 months and 10 days from the July 18 point 10 we arrive at February 28. This is where I have located the hypothetical point 23 on this chart. But we could as well measure from point 14 in which case point 23 would be located on March 21 of next year. In either case this analysis suggests that the Dow will advance during the first quarter of 2007 but that the net gain will represent but a 5% or so advance from current levels.
Posted by Carl Futia at 1:33 PM

The Feb/March topping would also be consistent with the four year Kitchin cycle as well as the 9-12 month stcok mkt cycle.

How does George Lindsay's work fit in with Elliott Wave theory, if at all?