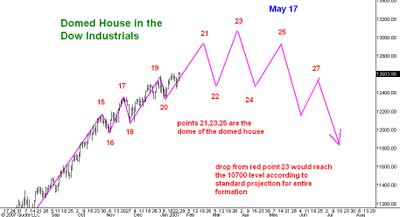 Here is a daily chart of the Dow Jones Industrial average. On it I have labeled the turning points of an evolving example of the domed house portion of an instance of George Lindsay's Three Peaks and a Domed House formation. I last commented on this here.

As I said in the last post I believe that the market completed the "five reversals" phase of the domed house by putting in its point 20 low as illustrated on the chart. We are now in the rally phase which will lead to the dome of the domed house, points 21 - 25. This should look a little like the standard "head and shoulders" chart formation. I estimate that the top of the rally at point 23 will occur in late March and the "right shoulder', point 25, in mid-May.

Once the dome of the domed house is complete an extended, muli-month decline should begin. I estimate that it will drop the average a little less than 20 % from its high, carrying it down to 10,700 or so, the level at which the entire three peaks and a domed house formation began.
Posted by Carl Futia at 9:51 AM

Thank you for the update. When you get some time could you also update the Nasdaq?

This is "too perfect" a picture for a market to follow like some sort of Hollywood script. It won't happen. The market will go down when it will go down, but it won't follow some sort of a magical formula as if there are already people out there positioned for this eventuality. Equities are myopic -- they have been trading like this since the end of the major bull market in 2000. They don't price the future, they have a hard time pricing things like they are right now -- such as the much-talked about and non-existent goldilocks scenario that everyone's obsessed about.

Thanks for the DJI Domed House update. Any new thoughts on the Nasdaq 100?

Hello Mr. Bullish -- having surrendered the 1435 support, key day reversal so far in SPX?? Food for thought for you.

Carl,
It looks like the points 19 and 20 are the same in the previous update. Is this a mistake, or did you genuninely change your mind?

any time a trader will show us his tools, relentlessly forcast the future, and share with us a breadth of imagination, that trader has my respect. as mr futia has said,most people should not speculate. i have my own tools and often they are at odds with mr futia's.but i do not have his vision.. for example, when he forcast a top at 150 in oih, i did not see it.. but when i looked at the charts of the top ten stocks in the oih they were all screaming sells basis my own work. just an example of how to use his vision.

Didn't Lindsay indicate that the Domed House typically traverses a period of 7 months and 8-10 days? How would that square with your time estimates for the peak, and could it be possible that the 7 month period has led to a peak right here, given the June lows? Thanks much for your excellent work--

Actually, the 7 month 10 day period usually starts at point 14. Point 14 occurs after the end of the "separating decline" (from point 7 to point 10) which separates the three peaks from the domed house.

Lindsay said that the entire formation (which encompasses the rally to the first peak as well as the drop from the top of the domed house to the ultimate low) generally lasts a little less than two years.

Hi
I am just discovering charts that deal with the % of stocks over the 50DMA 200DMA on the major indexs. The early Feb. peak on the doomed house chart and charts dealing with the % of stocks over the 50DMA line up very well. Ysing STOCKCHARTS the symboles are: $NYA50R $NAA50R $SPXA50R . They all look to be turning down now but the indexes while the 200R's are still moving up but nearing a top.

And I do believe in this scenario!