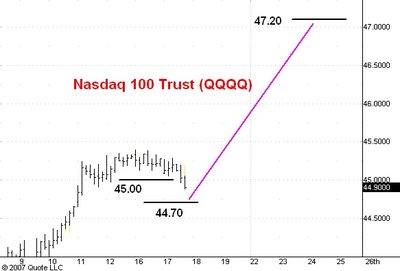 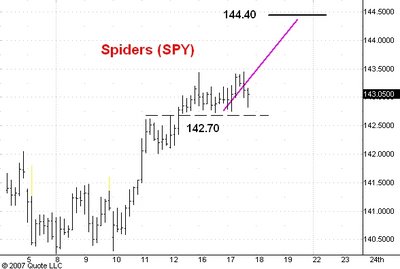 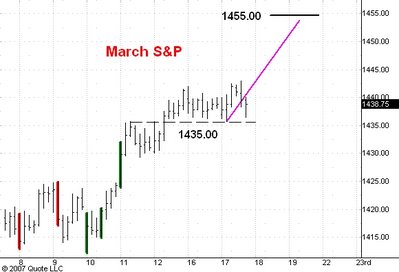 Here are hourly charts of the March S&P's, the Spiders, and the QQQQ's. I last commented on these markets here.

The S&P's and Spiders remain in the narrow trading range that began last Friday afternoon. I still think support in the S&P's is at 1435 although a drop into the 1433-34 range wouldn't really disturb the bullish picture. Similarly, the support in the Spiders is at 142.70 but a move as low as 142.50 wouldn't disturbe me. I am expecting both to breakout on the upside once these consolidations are complete.

The QQQQ's are now acting a bit worse than the S&P's after being the stronger market so far this year. I think they will hold support near 44.70 and then resume the rally to 47.20.
Posted by Carl Futia at 3:10 PM

Carl,
I love your blog and I am a big fan of yours. I appreciate everything you do. I have been studying technicals and speculation for some time now, but have a hard time identifying how you come up with some of your short term targets for for the Q's and Spy's> Is it at all possible to give a little there in your spare time...if you have any. =)