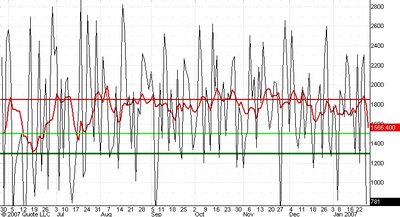 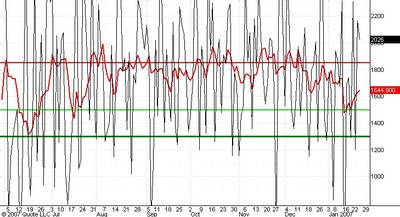 On January 25 Dave pointed out to me in a comment that the first chart you see above this post shows incorrect data. The chart at the top of this post is the correct one and tells a different story. In fact the market never reached the moderate oversold, light green line. Morover, at the highs on January 25, a clear bearish divergence was visible since the 10 day moving average reached the overbought line but was still visibly below its November high. However, I think this divergence is still only a minor one because the moving average did not first reach moderate oversold levels. I expect a more significant divergence(s) over the next couple of months.


Here is a line chart ( added Jan. 26: the first chart above this post) recording the daily count of the number of issues traded on the New York Stock which advance in price. The 10 day moving average of this number appears as fluctuating red line. I last commented on this indicator here.

The moving average is now in a rally phase. I think it will continue up to the red horizontal line but I expect it to stay below the high levels it reached last November. If this happens I think it will be the first significant divergence with bearish implications we have seen since last June. Morover, it would not surprise me to see a second such divergence before the averages put in the top I am expecting during the first half of this year.

In any event I think the uptrend has entered its "rounding over" phase. Even so, I also think the Dow industrials will make it up to 13000 and the S&P 500 to 1500 before the bull market ends.
Posted by Carl Futia at 1:28 PM

Thanks for all your great work! I have a question as to where and how you get the NYSE chart that you refer to from time to time?

I use stockcharts.com to chart the advancing issues and the 10 day moving average looks different for the last week shown in January. It looks like your data shows a spike down around Jan 16; however, Jan 12 was an up day and the 16th and 17th were relatively flat.

The spike downwards you cite occurred on January 5 and is recorded accurately on the chart.

I don't mean to be obstinate, but what do those vertical lines near Jan 16 represent?

You are correct Dave. Thanks for being persistent. I have ammended the post accordingly.