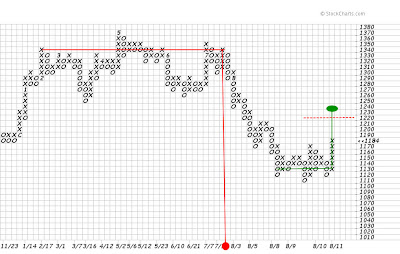 This week's price action ha dramatically changed the outlook for the S&P. The chart above is a 10 point box, one box reversal, point and figure chart showing this year's action in the cash S&P 500.

Contrary to my expectation the drop below 1240 was not quickly reversed. Instead the market dropped to 1110 (and to 1077 overnight in the futures) before stabilizing. The count across the top area projects a low around 1000 or a little lower. Recall that the July 2010 low in the S&P was 1010.

In the meantime another trading area has formed on this chart and projects a potential rally to 1240 or so. This would be a rally back to the lower edge of the top formation which is now strong resistance. The midpoint of the drop from 1370 to 1110 is 1240 also (red dash line which is drawn 20 points too low for visibility on the chart).

You presented both the bullish and bearish case. Bravos.

An objective trader may evaluate both sides.

Hi, Carl, by my calculations, a P&F target using a 10 point 3 box reversal is exactly 1010...very close to your one box reversal target.

Carl,
This is a meaningful change in your market outlook. Kudos for making the change after your steadfast belief in 1400+. It's nice to know that market action does alter your view. Too many analysts stick to their beliefs rather than listening to the market. I've always regarded you as a very good listener.

It appears that violation of 1240 was the catalyst to change your outlook. i would like to see a regular chart with your usual "box theory" approach. I've never been fond of point and figure charts and find your boxing approach to be quite elegant and much easier to understand. I think your one of the best charters out there.

Does this action now alter the aggressive contrarian?

Thanks for your sharing.

carl
monday you may or may not be changing your tune . if this market did actually put in a somewhat mdeium term low then the next 2 weeks should be upwards
price then would matter , however
time wise it is tuesday that matters as well as all of next week should be one direction up or down , end aug 28th is the next major swing dates high ow low to be diciced yet the market is extremely oversold and money appears to be leaving gold and will need a home which may or may not support the stock market .
good luck joe

CF,, I find SPX 970 has important significance (in agreement with your 980 target),, if reached. MK

Carl, I try to look at the big picture. Are we still in a bull market? When looking at the bull:bear etfs ratio I don't see a prodounced head and shoulders or domed house formation either in the price or macd. Such was the case in Oct. 2007

Carl, thanks for update. It's been some roller coaster ride that's for sure!! I've been having serious computer virus issues and could not get on line all day yesterday which drove me nuts. Janet

1400 IS COMING...THIS WAS AN ABERRATION.....I HOPE YOU REVERSE YOUR ANALYSIS SOON

Hey Carl
i want to thank again for mentioning Ed carlson's book on George Lindsay . i know you have discounted the huge 3 peaks domed house pattern from 1997 to 2009 but i was looking at the Try day Method and i figured why not use it on the swings from 2001-2002
as points 7 to 10 and the peak at point 23 . the target price was 6589.64 for its target low . the dow was only below that level for 4trading days . that method alone makes the price of the book worth while . very good stuff in there .
thanks
joe longwill