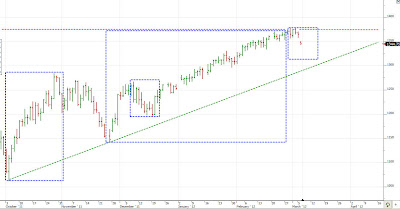 Today's price action looks like a downside breakout from a small trading range which had formed during the past two weeks. I think it means that the ES is headed for the dash green trendline. A more precise estimate of the upcoming break is the size of the drop in early December which was about 71 points. That gives a downside target of 1306 (small blue dash rectangles).

I think this is only a normal correction in an ongoing bull market. There is still the possibility that the ES is forming the top of a domed house (see this post) but if so it still should rally above its recent 1377 top before the top is complete. A more bullish prospect is that there is no ongoing 3 peaks and a domed house formation and that instead the market is headed for its 2007 top at 1587.
Posted by Carl Futia at 11:36 AM

I dont' think the top is here yet. Commodities are still lagging. Probably somewhere around point 16 then a sideways market.

wow. where did THAT come from?

The problem is: many people await a 1300-1310 zone will be a terminal support. Too many?
For me it was a first, natural thought to seek a support there too(you know, square of 9 at 1306, 38% retracement of last leg up, etc.).
But when I saw many people prognose the same, I'm not as sure as I was a few days before.
I don't like to run in too big and crowded herd :-)