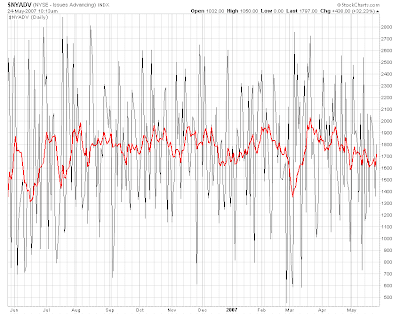 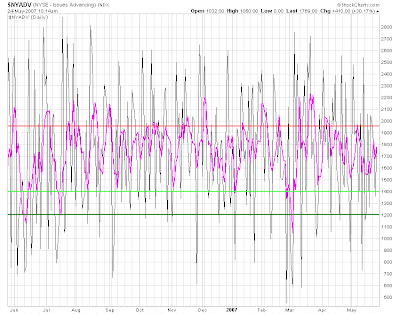 Here are charts showing the daily count of the number of issues traded on the New York Stock Exchange which advance in price. The pink line on the first chart shows the 5 day moving average of this number while the red line on the second chart shows the 10 day moving average. I last commented on this indicator here.
The striking thing about both these charts is the steady progression of lower highs in the moving averages which started to develop in early April and which has accompanied the movement of the Dow and the S&P 500 to new high ground for the past 5 years. I tend to take divergences such as this one seriously only after the market has gotten close to a reasonable price target. In this previous post I explained why the 155o level in the cash S&P was a reasonable price target for the advance from the March lows. This average is less that 25 points from this target so it is time to take bearish divergences seriously.
This is one reason why I am expecting the Spiders to drop to 150.00 and the June futures to drop to 1500 before another upmove can start.
But it is important to note something else about these charts. Both moving averages are already close to "oversold" levels that normally terminate reactions within an uptrend such as the uptrend which started from the March 2007 lows. It won't take much downside pressure to move both moving averages to "oversold" levels. This is one reason why I think the reaction from current levels will be limited in scope and will be followed by a move to new bull market highs.
Posted by Carl Futia at 10:15 AM

Carl,
I assume that you have similar charts for 2000, 2001 and 2002 you could post. What would be interesting is to see how these moving averages performed during this sustained downturn, particularly from the "oversold" perspective.