Does This Bull Have Legs ??? 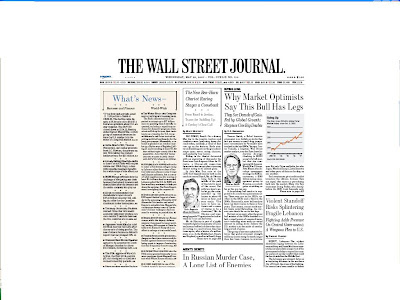 Here is a scan of the top half of yesterday's front page of The Wall Street Journal. The headline highlights "optimists" who say that this bull market has legs, i.e. that it will go on for several more years and carry prices much higher than they are now.
Some of you are wondering whether this is the proverbial "kiss of death" for the bull market which started in 2002.
My own view is that this headline is unusual and does not reflect the current state of market sentiment. Reasonable people can differ with my assessment of course. But based on 40 years of applying contrary opinion analysis to the markets I think I would have to see many more articles in the same spirit as this one before I could conclude that public sentiment about the stock market's long term prospects is bullish.
Nobel Laureate Vernon Smith makes an important point in this story. He observes that in his experiments and in his analysis of past bubbles, "...once investors inflate a bubble [as they did in 1999] and endure a crash [2000-2002], they are unlikely to repeat this mistake until memories fade. " A lot more novices have to get interested in stock market investing before a new bubble can inflate. This process generally takes about a generation (20 or so years) to complete.
I entirely concur with his views. After the 2000-2002 bear market I thought that stock prices would remain essentially flat for 10-15 years as they did during the 1966-1982 era. But as prices rallied from their 2002 bear market lows it became apparent to me that the people who were hurt by the 2000-2002 crash were staying out of the market entirely or were hoping for a repeat so that they could avoid it and then buy at the bottom.
Partly for this reason I have completely reversed my very long term views about the market. I now think that the 2002 low was the start of a bull market that will probably carry on at least 15-20 years and multiply the averages several times. The next 15 years will be very much like the 1982-2000 and 1949-1966 episodes in US stock market history. Of course during this mega upmove there will be the occasional 20-30% drop in the averages. In fact I suspect we will see such a drop from a top made sometime this year. But every such drop will be a huge buying opportunity.
My opinion is that, if you are an investor who has to make only one asset allocation decision now, you should put all your money into the US stock market. Then throw away the account statements you get for the next 15 years and do something productive with your life. At the end of this time I think you will find yourself much weathier than you ever imagined possible and will have done far better in the markets than most people who pride themselves on their market smarts!!!
Posted by Carl Futia at 11:49 AM

tell me please Carl or make a suggestion by being a Trader what else productive could I do with my live...........

dear sir
while i highly respect your work
i have to argue with your 15 to 20 year bull mkt from 2002 . partly from a demegrafic point of veiw as well as some longer term cycles i look at . a 20 yr bull mkt would
make the case for a top in 2018
plus minus . there is a case to be made for a high then . but over this time we have several bearish cycles in between and there is a bearish cycle low 2021 plus minus .
i am though of the opion that this present down turn will end in july
and we will see much higher prices
into feb march 2008 and even higher still into 2010 with a cycle low in 2011 to as late as 2015 . and then another cycle high
due in 2018 and a larger decline
and cycle low due 2021.
in summation your partly correct and partly wrong .
while many people dont follow the benner business cycle i have traced it back over the past hundred years and i still think it
is an interesting cycle to follow .
time will tell .
i guess the real question we all should be asking ourselves is simply where will the major sector
be that goes vertical . there is always a sector that outperforms
and for me there is a major trend change for this cycle due in feb
to march 18 2008 ( it should be a top )provided of course that we see the low in late july this yr

I will have to disagree. I think ther are debt bubbles forming all over the place. Look at what a flat costs in London.

The problem is picking the top. I have gone from 95% to 85% invested and I think I have been to early. I can not figure out if we have 2 months or 2 years left in this Bull. But I firmly believe easy money is causing bubbles in lots of assets.

In the mean time this should be fun :)

What's your outlook on the Shanghai Composite?

There's no US bubble, but there's a US tight rope stretched over stagflation, recession, and worse--and what holds the rope at both ends is the very real (though not very mature) Chinese bubble. The $SSEC and $INDU are playing chicken. Febuarary 27th was a reality check.

So I agree that we eventally head down 20% or more from 2007 into 2008. Longer term fundamental projections need to address US debt and entitlements. There are no historical precedents for our current fiscal crisis.

I am believe that 6-7 june is probably the top for the stockmarket world,this date is work very good in the system in the past ,and after the dow jones can down 5-10%.

One thing I like about your blog is that you're not afraid to call it as you see it. Many thanks for your observations. The sad reality is that, over the course of most market periods, holding U.S. equities over a 15-25 year horizon would have returned far more (with dividends, even considering inflation) than most short-term traders are able to achieve.