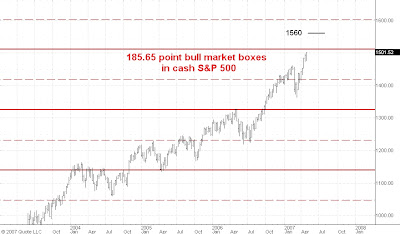 Here is a weekly chart of the cash S&P 500 index. I last commented on this chart here.
As you know I think that the bull market which began from the October 2002 low at 768 has been controlled by boxes which are about 185 S&P points high. I have drawn these on the chart above. The February-March 2007 reaction was the first of the bull market which did not either start or end on the divisions of the boxes you see above. I think this is a warning that these boxes which have functioned so well for 4 years are loosing their predictive power.
I want to point out that the February-March reaction started near the 3/4 division point of a box and ended near the 1/4 division point of the same box. I am guessing that the market now will start respecting the 3/4 and 1/4 division points of these boxes instead of the 1/2 division point and the box boundary itself. If so the next upside target is about 1560 which is the 1/4 division point of the next higher box.
Posted by Carl Futia at 10:53 AM

I have been following you for a while. I have friends who follow the EWP, Cycles, etc. Just like how you are following the boxes, George Lindsay, etc. You bought up the lack of confidence on the boxes which leads me to this. Given the by far record of liquidity infusion...and still climbing, into the markets could very well make these tools worthless or at best very skewed. My friends who do follow the above have been complaining and losing a lot of money, that "things" are not happening like the past. Well, it is becasue we are in an environment like we have never seen before. Maybe that is why you question the boxes or even your daily model?

"its different this time" that makes me nervous...

given mr futia's projection of 13700, i decided to take the five dow stocks listed in ''tales of the tape'' and apply the dow multiplier based on mr futia's upside projections.. roughly 200 dow points... that leaves 250 points for the other 25 dow stocks.. that leaves an average a buck and a quarter upside...sounds lik the average trader should be selling into strength..i believe THIS is the most important message of mr futia's work if you are basinf your financial well being on his market map.