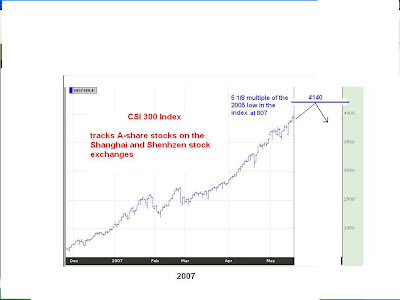 There has been lots of talk and commentary about a stock market "bubble" in China. The chart you see above comes courtesy of Bloomberg and Morgan Stanley. It is a daily chart of the CSI 300, a cap weighted index of Chinese A-shares listed on the Shanhai or Shenhzen stock exchanges.

So I think something similar is afoot in China. To be sure, every big break in the CSI 300 index will encourage a sympathetic break in stock indices all over the world. So it makes sense to keep an eye on the CSI 300. However, I don't think this China bubble is anywhere near the popping stage. Indeed, I think it quite likely that we shall see the CSI 300 trade above 20000 over the next 5 years.

In the meantime I see short term resistance near the 4135 level which is the 5 and 1/8 multiple of the 2006 low at 807 as shown on Morgan Stanley's chart. The break from 4135 will probably be short and quick and will carry the average down to 3500 or so.

Incomplete analysis--again historical precedent is irrelevant. There is no shorting permitted on the Shanghai index. This means that all those crying bubble, can't bet against the market, and can't hedge. It means that resistence levels can't be broken through by the combination of buyers and those covering shorts. (How far would the Nasdaq bubble have gotten without short selling?) A short is a promise of a future buy--and that provides gradual levels of support when the market turns down. No shorts -- no brakes. All of these factors logically (with all implicit limitation of applying logic to markets) means that the Shanghai index shouldn't be able to go as far as other bubbles, before it breaks down hard. What might be more true is that this particular bubble won't inflate nearly as much as nearly everyone hopes it will. That at least is the wish of the Chinese governmnent. They eliminated a fly infestation by distributing fly swatters and assigning quotas. They have a way of getting their way.

From The Economist print edition, 'China's economy may be less vulnerable to a bursting of the stockmarket bubble than it appears'. Source: http://www.economist.com/finance/displaystory.cfm?story_id=9225696

Analysing a bubble is always hard, and I agree that bubbles always inflate beyond expectations, or else they would not be bubbles. Nonetheless, the parabolic volume of late is calling for a correction somewhat I reckon.

Sorry for the plug, but please check out my new blog at

I completely disagree with the first comments about your notes on China. Historical precedent analysis is the foundation of successful investing. Secondly, one would have to search a little to find a forecast such as this one. I congratulate Carl on offering an alternative perspective on the Chinese stock market. I do not know much about the South Korean stock market history, but I would bet that it experienced a good run as well.

The best quantative analysis is all about what can happen now--not what's happened in the past.

You have to search a little to find a forecast like Carl's? No you don't all you have to do is copy and paste the link in the second post above.

Harder to find is people who understand what it means to have a market that can't be shorted.

I read EVERYTHING and this is the only one I've found:

More likely than a crash the Chinese government will massage a soft landing out of this. They've already started and they're not going to stop until they get the results they want.