will the ship capsize? 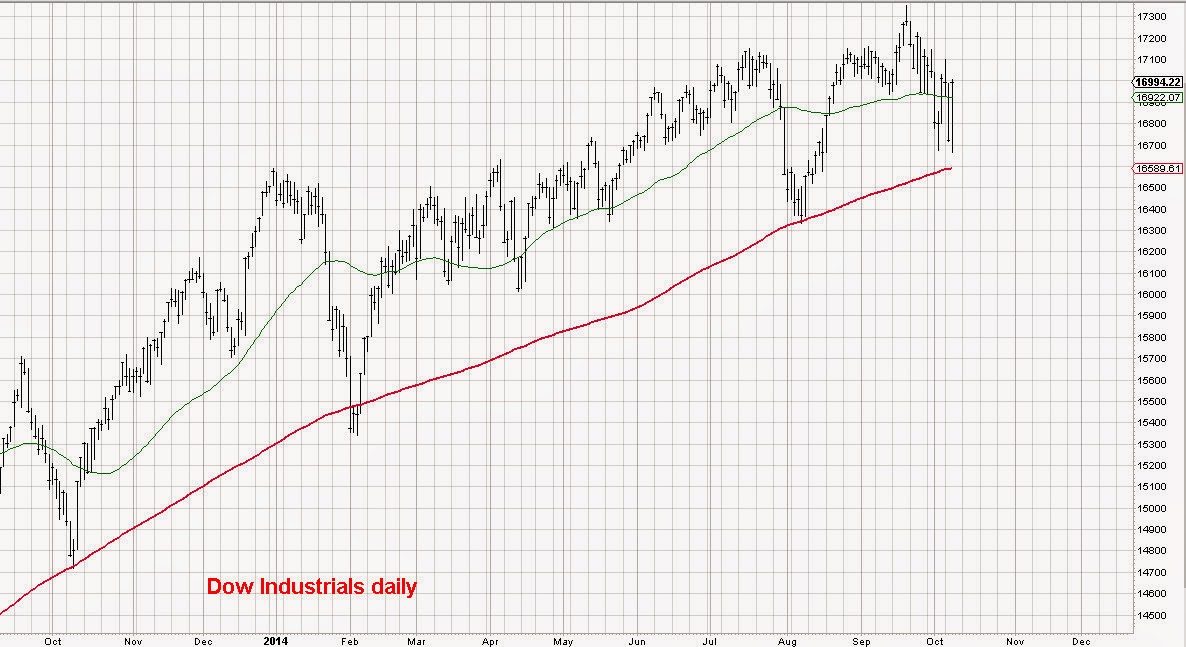 The three charts at the top of this post show my main trend indicators for the US stock market: the Dow, the S&P 500, and the NYSE advance-decline line.

The action in the US stock market this past week has been very bearish in my opinion. The markets rallied very fast from last week's Thursday low, then gave up all the rally''s gains to make another low yesterday. That second low was at the same level as the first and was followed by a similar sized, even faster rally. Today most of yesterday's gains have evaporated.

When fast rallies are followed by even faster declines which retrace all or most of the rally one can infer that the buying which generated the rally was done mostly by short time frame traders. The market would have been supported on any modest subsequent correction had long time frame traders and investors instead been buyers. In this case wee have seen not one but two big, fast rallies which covered almost the same ground and which have been immediately and completely or substantially retraced. This tells me that the market's technical condition is weak and that investment buying is no longer a big factor in this market. If I am right about this the prognosis for US stock is a very bearish one.

Three other considerations are pointing to a likely bear market ahead.

First is the fact that the bull market which began from the March 2009 low point lasted 66 months, a near record and 6 months longer than the 2002-07 bull market. This by itself suggests that valuations have become unsustainably high, especially if interest rates rise  over the coming months as I think they will.

Second, the Fed is in the process of ending its open ended quantitative easing program which it began in September of 2012. The Fed twice before ended QE programs, once in the spring of 2010 and again in the spring of 2011. Both QE halts were followed by substantial stock market corrections. I think the same thing is about to happen now.

Finally, the action in the English (FTSE), German (DAX) and French (CAC) stock markets has been very bearish as the bottom three charts above this post show.All three are below their 200 day moving averages. I think this confirms my often expressed opinion that the European Central Bank has been well behind the curve in adopting a QE program of its own. Until the ECB shows it is serious about increasing the rate of growth of nominal GDP in the Euro-zone I think these three markets will continue to drop.

Needless to say, a bear market in Europe will have very negative effects on US stock prices.
Posted by Carl Futia at 1:18 PM

People seem to forget the 4-year cycle because it was so mild in 2006 and 2010. We may find out that it isn't dead. The DOW also presents a possible ending diagonal going back 11 months which implies a big downdraft that would fit that cycle. The diagonal ended with the typical burst of volume, the day of the Alibaba IPO. The top was also within 2 days of 13 years from the 2001 panic low.

Wow!! And I actually thought the correction ended yesterday. Got the word sucker written on my forehead. I saw it as having formed a double bottom. But you weren't fooled. Love your work and blog, best there is!!!!!!!!Janet