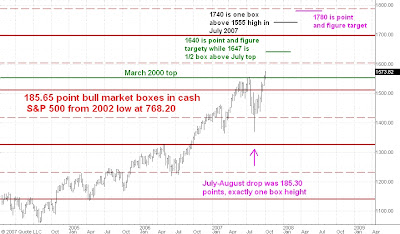 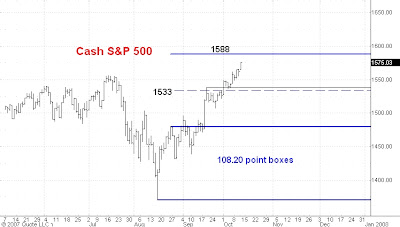 Here are two charts of the cash S&P 500 index. The first is a daily chart and shows the intermediate term boxes which have formed on the rally from the August 16 low. The second chart is a weekly chart which shows the bull market boxes from the October 2002 low at 768. I last commented on this second chart here.

As you can see the S&P is nearing the 1588 level which is the top of its second box off of the low at 1370. This is a logical spot to expect a reaction of 40-50 points, about the size of the last reaction on the way up. If such a reaction does materialize the market should find support in the 1530-40 range which is the 1/2 division point of the box and also the top of the rally right after the last rate cut by the Fed.

Looking further ahead I lean towards the view that this market is going to get close to the the optimistic point and figure target at 1780 which I cited in this post. How close? Well the S&P is now showing a tendency to repect the 3/4 and 1/4 division points of its long term boxes (instead of the 1 and the 1/2 division points it respected during the 2002-2006 period). The 1/4 point of the next long term box stands roughly at the 1740 level and it coincides (naturally) with the top of the second box defined by the July top at 1555 and the August low at 1370.

A less optimistic scenario would call for a top near the 3/4 point of the current box which is roughly 1645 and coincides with the long term point and figure count from the 2002 low which you can see here.
Posted by Carl Futia at 1:41 PM