It's Worse Than You Think! 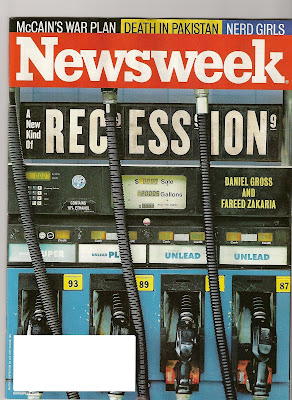 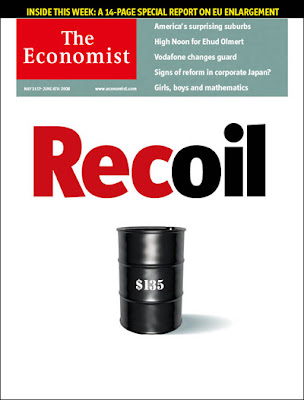 The heading of this post is the headline for this week's Newsweek cover story on oil and the economy. Bottom line: Newsweek and its panel of experts have decided that any hope for economic recovery (from a recession that hasn't actually happened yet!) is forlorn and should be abandoned while we still have time to save ourselves from disaster.

Below the Newsweek cover you will see the two latest cover stories from Business Week and from The Economist. Both are about the story which is in the forefront of public consciousness at the moment- super high prices for gasoline and for crude oil.

I think there has been a partial recovery from the extremely bearish sentiment on the stock market and the economy which prevailed during the first quarter of 2008 and upon which I commented in 9 posts during the January-March period. These posts can all be found here. However, I don't think it will take much to turn sentiment quite a bit more bearish. The Newseek cover illustrates this point. So I believe that the March low in the S&P near 1250 will hold and that a move to 1500 or higher will develop from the low of the reaction which is currently underway.

Public attention is increasingly focused on the $200 per barrel level in crude. I don't think we'll even get close to that price. In fact the current extreme level of volatility in crude oil futures tells me that the top is close at hand and will almost surely develop below the $150 level. There is even a good chance that last Friday's $10 rally to $139 marked the end of the bull market in crude.
Posted by Carl Futia at 2:35 PM

hi carl
ill keep it simple
there are so many top to top counts
bottom to bottom to top counts
all points to this week for a turn in oil , there is also a monthly bottom to bottom to top count in oil from the bottom in 1998
that i agree with you that oil is putting in a multi year top
the headlines only add to this
but the question i also wonder in relation to this is how will the oil sector stocks fair if oil was to decline hard , would this put pressure on the dow and spx ???
if so we may have to sit through
some sluggish index's into august
before the overall trend turns back to the upside .
my own cycles on the dow are pointing up from june 4th
another cycle was june 9th for a reversal to the upside
and the last cycle turns up june 12th and it is the most important at the moment , so i dont think were out of the woods just yet
as there is a major fibonacci time cluster in august , which is also where my longer term cycles turn up . how it all plays out im not so sure at this moment yet im not trusting todays reversal even though it was consistant with the short term cycles that have been working this yr .
as for oil ??? were close to a top
and maybe topped but i need to see more proof , im lightly short a few oil related stocks as a hedge
against my bullish index positions
both taken on friday
joe