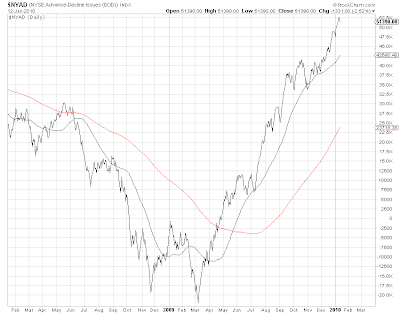 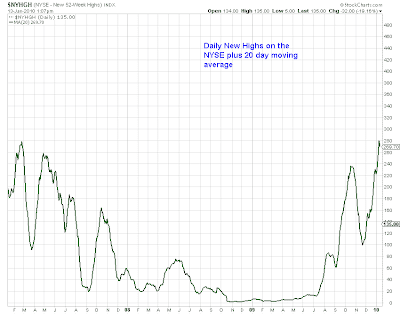 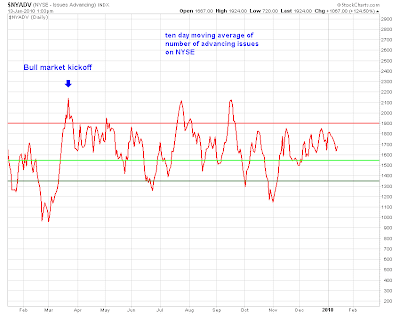 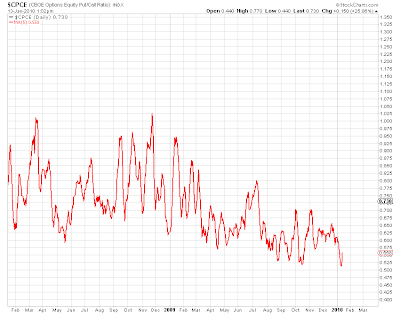 I thought it would be useful to explain why I think a 40 point break is imminent but also why I think this bull market is still in good shape.

The chart immediately above this post show the 10 day moving average of the CBOE equity put call ratio. I regard this as strictly a short term timing indicator. A swing in the moving average past a recent extreme or to an obvious trend line usually means a reaction of a few days to a few weeks is imminent. In the present situation you can see that early this month this moving averae dropped below the low point it established in mid-October. This shows a lot of short term bullishness by put and call buyers and as such suggests that a reaction of at least 40 points or so is likely soon.

The second chart shows the 10 day moving average of the number of issues traded on the New York Stock exchange which advance in price each day. Earlier this month this moving average put in a second lower top even as the S&P reached new rally highs. This is a bearish divergence with only short term implications. It also suggests a break of 40 points or so dead ahead.

The third chart above this post shows the 20 day moving average of the number of issues traded on the NYSE which establish new 12 months highs each day. This indicator as moved above the highs established in 2007 and is now at its highest level since the March 2009 low.

The top chart shows the NYSE advance-decline ratio. Not only is it in a visibly strong up trend, but it stands above the highest levels it reached at the 2007 bull market top.

These last two indicators are telling us that this bull market is in good health and has much further to go before there is any danger of longer term top.

All in all these market generated clues suggest that a break of 40 or so points is likely but will be followed by new rally highs. I think we shall see the ES trade at or above the 1200 level during the next three months.
Posted by Carl Futia at 1:05 PM

Hello Carl. Thank you for your work.

If you believe 30-40 break is imminent why haven't you closed your 1/2 long position. I am trying to understand the logic.
Thank you.

Hi Carl,
Thanks for all the colorful charts and information.
Happy New Year!
KD

You just answered my question, thank you Carl. But here's another one, is going short ES too risky for you right now?

now your talking my language carl
weather it is a 40 point drop is irrelevent the market is showing signs of bearish divergances that need to be worked off , same holds true with the advance decline line
many of my longer term indicators are short to medium erm overbought
the longer term indicators though are not even close to k=giving any type of sell signals ,
thanks for the update
joe

Joe,, hope your bearish positions can whether the coming storm ! MK