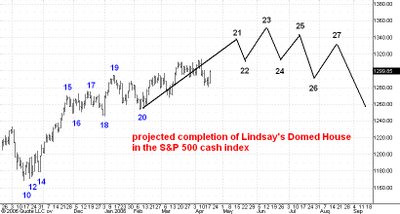 Here is a daily chart of the cash S&P 500 index showing my revised view of the ongoing domed house pattern. This pattern is the second half of George Lindsay's Three Peaks and a Domed House. I have discussed this aspect of Lindsay's work many times on this blog during the past year.

I had been expecting point 23, the peak of the domed house and of the bull market, to occur in late April. My secondary choice was June 6. This June date is the standard 7 month and 10 day interval from point 14 which occurred on October 27. Since the market has had a substantial reaction during the past three weeks I think that June 6 is now the most reasonable prediction for point 23.

Note that June 6 is also near top-to-top and low-low-high projected top dates.
Posted by Carl Futia at 12:31 PM