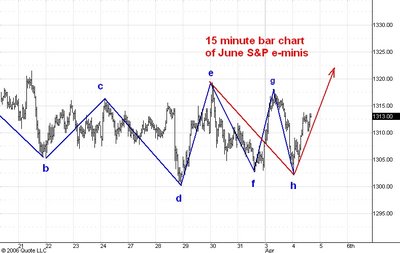 Here is a 15 minute bar chart of the S&P e-mini futures.

This morning I thought that the rally to 1310 would be followed by a drop to 1293. Instead the market moved higher to 1313.75 and moved well into the upper 1/2 of the 1300-1321 trading range. As I have said, moves with a trading range generally stop near extremes, not in the middle. Of equal importance is the fact that the drop from 1313.75 appears to have stopped at a second consecutive higher low. Finally, at this morning's low the whole drop labeled e-f-g-h looks like a completed three phase correction.

These considerations make me think that the market is now on its way to 1320 and that this move from 1302.25 this morning will probably culminate in a breakout above 1321.
Posted by Carl Futia at 2:03 PM